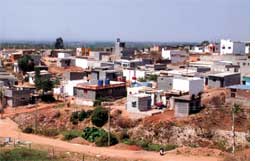 People in slums say possession, past experiences the problem areas

KARNATAKA wants people in the state's slums to move to apartments. But the the slum dwellers want tenurial rights of their existing homes, so they can sell the houses at will. They now have a possession certificate, which bars them from selling houses. But the government insists multi-storey apartments are the solution because there isn't enough land. The slum dwellers disagree.

Syed Afsar, a welder, had lost his home in 2002 when his slum was demolished for a railway track. He along with 340 displaced families has been living in Hosabala Nagar in Bengalooru since then. It has taken a lot of struggle, said Afsar, to get the basics in place. "Several visits to different departments has fetched us streetlights, a tank and a community bathroom. There are no roads, or drainage. We don't want to go through the hassle again," he said.

The state government is planning the housing project under the Jawaharlal Nehru National Urban Renewal Mission (jnnurm). The one in Hosabala Nagar is designed for 675 houses--116 on the ground floor and the rest on the three floors above it. Each house would have a carpet area of 268 square feet. The Hosabala Nagar project is estimated to cost Rs 12.15 crore for housing and Rs 2.36 crore for infrastructure. Of this, 10 per cent would be borne by the people. Karnataka is planning 35,000 such houses in the state.

The plan itself, say people in Hosabala Nagar, is a problem. "jnnurm projects are supposed to be carried out after consultations. No one consulted us. Where do we stay when the apartments are under construction?" asked Abida Begum, member of the area's welfare association.

Bore Gowda, chairperson of the board, said the new housing scheme was the best bet. "Slum dwellers will need to make their own arrangements in the interim. The government has not given funds for transit accommodation," he said. Gowda also said that the board was not authorized to give tenurial rights to the slum dwellers and that the municipal corporation--Bruhut Bangalore Mahanagar Palike--had the last word. S Subramanya, commissioner of the corporation, said the state government had not sent them any information regarding tenurial rights.