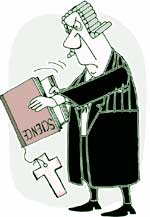 Aus federal judge has ordered a Georgian district school to remove from its science textbooks stickers which declared that "evolution is a theory, not a fact, which should be approached with an open mind, studied carefully, and critically considered". Judge Clarence Cooper of the Georgia district court ruled that the message endorsed the Biblical idea of evolution and it was contrary to the us constitution's promise to separate the church and the State. It also went against Georgia's constitution, which prohibits the use of public money to aid religion. The petition was authored by a group of five parents and the American Civil Liberties Union.