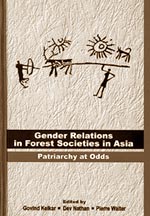 Women's rights over resources in forest societies is an issue that has attracted scant attention from the academia. In the book A field of her own (1994), author Bina Agarwal explores the interplay between gender and land rights in South Asia. Agarwal's work is the stray exception and not the rule. Studies on forest management in Asia abound, but few address the role of women. Policy makers are also guilty of similar neglect. The volume under review, however, attempts to plug this gap.

Gender relations in this volume are perceived as a key determinant in effective forest management, and therefore something policy-makers must take note of. The book uses for its material studies carried out among various forest communities of India, China, Malaysia and Thailand. Four critical issues raised are: How do gender relations affect use and management of forests? Do women play a pivotal role so far as managing natural resources and earning livelihood are concerned? Do gender relations alter with socio-economic and cultural changes within communities? What can be learnt from forest societies that value women's economic, political and social roles?

The book is divided into two sections: History and Myth, and Forest Management. Before the imposition of state pressures gender relations were more or less equal in forest societies. Women had considerable space, within the household and the community, and were free to make decisions about resource use. In fact, it was state-sponsored colonisation of forest societies by religio-cultural regimes such as Hinduism, Buddhism and Confucianism that disturbed gender equality. For instance, among the Naxis of south-west China, promotion of Confucian values subordinated women and denied them their decision-making powers in forest management. Likewise, in the Khasi hills of Meghalaya, Christianity and the values propagated by missionary schools altered the value of forest and land, simultaneously eroding the ideological and material basis of matrilineality. In Sabah, Malaysia, domestic science schools started by missionaries drove women into the folds of domesticity, thereby undermining their political role in the community. What is more, free health care ministered by the missionaries weakened the traditional role of women as healers.

Colonisation of indigenous societies led to centralised forest management. When forests were under local control, women enjoyed a celebrated status owing to their knowledge of forest flora and fauna. Women continue to use forests after centralisation, but they do so furtively. Depletion of forests over the last century and a half has also resulted in a reduction of women's income from the sale of non-timber forest products. This has spelt greater hardships for women who now have to walk longer distances to fetch firewood, fruits, vegetables and other necessities. Also, many forests were turned into monocrop areas that provided resources that women historically controlled. With limited access to a much-altered forest, women's capacity to ward off patriarchal forces was limited.

The state's efforts at centralising forest management did not go unchallenged. There were widespread rebellions against loss of local control of forests, particularly in India, China and Thailand. But these uprisings did not reassert the role of women in forest management. Instead, before such uprisings there were special drives to eliminate society of witches and evil spirits, part of the process of establishing men's authority.

Simultaneously, often the same communities have also witnessed struggles to overcome patriarchal norms. In fact, the Khasi, Warli and Santhal women interviewed by the authors continue to challenge government control over forest resources. While in Uttaranchal, women have asserted themselves in many community-managed forests.

The book makes a strong case for recognising women's role in forest management. Will our policy-makers take note? That is another question.