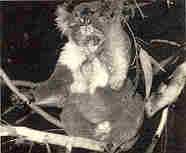 AROUND 2,000 teddy bear-like, adorable koalas, which could have possibly been killed, have won a reprieve. A boom in, the koala population on Kangaroo Island, 160 kin southwest of Adelaide, forced South Australia's national parks and wildlife service to tome to a painful decision of either having to kill the koalas or relocate them. However, environmental outrage across Australia and other countries have stalled the decision. But wildlife authorities agreed on March 19 to a possible relocation of the swelling number of koalas to the neighbouring state of New South Wales.

The koala population Swung so high that there were hardly any eucalyptus trees - the animals' main diet - left on the island to feed them. This could have soon led to mass starvation among the koalas. But as animal rights activist Deborah Tabart of the Australian Koala Foundation puts it: "We don't think there are too many koalas. We think there are too few trees."