No money for labs in antibiotics research

Though increasing bacterial resistance to antibiotics is making it difficult to treat diseases such as malaria, pharmaceutical companies do not consider it profitable to invest in research for new drugs. 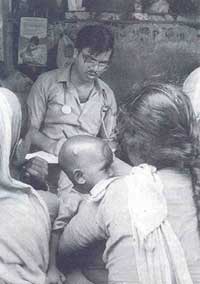 THE RESURGENCE of infectious bacterial diseases in the developed world is proof that the battle against them is not over. But there has been no corresponding surge in drug research, because multinationals consider large investments in research to be uneconomical (Science, Vol 257, No 5073).

Scientists warn against complacence in the treatment of bacterial diseases because many microorganisms have developed resistance to the antibiotics that had almost wiped out pneumonia, meningitis, typhoid, syphilis and tuberculosis in the developed world. But after half a century of success, the danger signs are becoming evident and there is a grave crisis in medical care worldwide.

Any new drug causes target microorganisms to develop a resistance to it, but, until recently, there were always newer drugs to continue the medical battle. But now, there are fewer effective new drugs and some microbes are even developing multiple-drug resistance, that is, resistance to several drugs. "We have an epidemic of microbial resistance," warns Richard Krause, a senior scientific adviser to the US National Institutes of Health in Maryland.
Resistance of microbes to antibiotics is a widespread problem and Mitchell L Cohen at the Centres for Disease Control in Atlanta, Georgia, reports the tuberculosis bacteria Mycobacterium tuberculosis, the pneumonia germ Streptococcus pneumoniae and the malaria-causing Plasmodium falciparum have developed multiple-drug resistance. Especially worrisome isthe multiple-drug resistant M tuberculosis because many infected individuals are also suffering from AIDS. A national sample study in USA indicated resistance of M tuberculosis strains to both isoniazid and rifampin -- the primary antibiotics used to treat TB -- had risen from 0.5 per cent in 1982 to 3.1 per cent in 1991 and a recent New York study shows 19 per cent of the isolated microorganisms were resistant to these drugs. In Pakistan, one-fifth of the cases of paediatric typhoid caused by S. typhi were found to be resistant to commonly prescribed antibiotics.

About 16 per cent of isolated food-borne salmonellae, which cause diarrhoeal diseases requiring antibiotic treatment, were found to have acquired resistance to one or more of 12 antibiotics chosen in a 1979 US study, but by 1989, 32 per cent showed resistance. Scientists attribute the increase to the use of antibiotics in livestock.
Growing microbe resistance is taking its toll in both human lives and health care costs. Because tests for antibiotic effectiveness can take days after the bacterial agent has been isolated, complications and even death can occur from drug resistance. And, warns clinical epidemiologist Paul Nunn of the London School of Hygiene and Tropical Medicine, because it can take upto three months to find out whether a patient is infected with resistant M tuberculosis, "a patient could have infected heaven knows how many people" in that time.

Drug-resistant microbes also push up medical care costs because several drugs have to be tried out against the resistant microorganism. About $100-200 million could be added to USA's annual medical bill, according to estimates. In fact, studies show treating a TB patient increases from $12,000 for a drug-susceptible strain to $180,000 for a multiple-drug resistant strain.

Antibiotics inhibit bacterial cell wall formation, protein synthesis and the replication of DNA, which is essential for cell division. However, sustained exposure to these drugs, results in bacteria undergoing genetic changes to resist the antibiotic, explains professor of medicine and pharmacology Harold C Neu of Columbia University.

Chromosomes undergo major changes or mutations, or latent genes present in the microbial DNA are switched on to facilitate resistant action. These resilient germs also develop resistance by exchanging DNA with other resistant organisms. So, explains Neu, if one bacterial species becomes resistant to a broad-spectrum antibiotic, it can transfer the resistance to other bacteria.

Neu says bacteria inactivate the antibiotic by either destroying it completely or modify it into a harmless compound, utilising several enzymes that they produce. For example, within three years of exposure to penicillin, Staphylococcus aureus developed the ability to destroy the drug with an enzyme, penicillinase.

Bacteria also can keep the drug away from the target within their cells.In a recent breakthrough, scientists at London's Hammersmith Hospital and at the Pasteur Institute in Paris, identified a gene mutation in M tuberculosis that made it resistant to isoniazid, which they say is toxic only after it is converted to another compound by the enzyme catalase. Resistant germs, they add, have managed to delete the gene that codes for catalase, thereby making isoniazid harmless.

Scientists now say drugs will have to be designed "rationally" to disarm bacteria for a longer period. Until recently, researchers would screen several drugs for their efficacy to find one that worked like the old antibiotic, but was sufficiently different to fool bacteria for a while.

Now, the emphasis is on first understanding how microbes develop resistance and then designing drugs. For example, researchers at the Bristol Banyu Research Institute in Tokyo found staphylococci developed resistance to kanamycin -- an antibiotic used to treat infections common in hospital patients -- by producing enzymes that destroy the drug. To confuse the bacteria, the researchers attached a molecular side chain to the site where these enzymes bind to the drug -- and the new formulation proved to be effective.

Despite the obvious health crisis, pharmaceutical companies and research organisations are slow in developing new drugs. US Food and Drug Administration figures show only five new antimicrobials were approved in 1991 and only two, the previous year.


George Miller, a microbiologist at the Schering-Plough Research Institute in USA, explains the economics of research are not in favour of new antibiotics. The main market for a new drug will be the developing world where drug-resistant bacteria pose a big problem; in richer nations, doctors can still find at least one antibiotic that will work. As it costs about $200 million to bring out a new drug, a company cannot expect to make a profit on it through sales in the developing world alone.

Doctors seeking to respond to the crisis, say experts, will have to prescribe antimicrobials with care so as to prevent the spread of antibiotic-resistant genes from one type of bacteria to another. Sanitation and hygiene in hospitals also must improve to reduce the risk of transmission. And, the experts warn, patients must finish the entire course of antibiotic treatment to ensure all the infecting bacteria are wiped out. Drug-resistant TB bacteria, explains Barry Bloom of the Albert Einstein College of Medicine in USA, evolved largely because TB patients failed to complete the regimen of 6-12 months of antibiotics.

Global surveillance of reservoirs of drug-resistant strains of microbes also will be critical, experts advise and WHO's microbiology and immunology support services have put in place the WHONET programme to keep track of infectious diseases and drug susceptibility. The network links two dozen laboratories in south and central America with a dozen in Asia.