Builders may 'get big bonanza in Dharavi 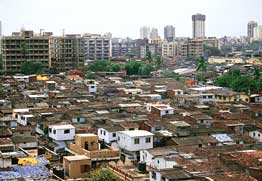 dharavi has once again hit the headlines with new developments on the much-touted project that aims to convert Asia's largest slum into a "world-class" locality. The latest on the state government's list is a proposal to amend the clause of the Maharashtra Slum Areas Act, 1971, which stipulates that 60 per cent families affected by a slum development project give their written consent to it. According to sources, the government wants the percentage of consenting families reduced to 51 per cent.

Media reports say that the Maharashtra government has begun work on this amendment because Maharashtra's slum rehabilitation authority (sra) finds Dharavi a 'difficult' area and is not able to garner enough public support for the project. The state government refutes all such insinuations, but sources point out that the issue will be discussed in a forthcoming state cabinet meeting.

T he original Dharavi redevelopment scheme, as proposed by Mukesh Mehta of Mumbai-based M M Consultants in early 2004, has been slightly modified and preparations are underway to invite global tenders, say sra sources.

While, the original scheme by Mehta planned to develop Dharavi into 10 sectors, the 213 hectare slum will now be 'redeveloped' into five sectors ('Dharavi simmering', Down To Earth, November 30, 2004). sra claims that the modifications would create space for recreation and public parks, and also accommodate industrial units. "Under the modified Dharavi redevelopment project, industrial units like pottery, ceramics and garments will also be eligible for rehabilitation, though with certain conditions," says I S Chahal, an officer on special duty, sra.

These modifications, however, have not allayed the residents' fears. "We aren't against development. But unlike the state government which wants only land development, we want development for the people as well," says Raju Korde, a Dharavi resident who works for Dharavi Times, a local newspaper.

About two years ago, state government officials got Dharavi residents to sign a document without informing them that it was a written consent for the makeover project. The residents got wind of the ploy and protested. This led the then chief executive officer of sra, Ujjwal Uke, to declare the written consent null and void. "So, how can the state government now invite global bids for the Dharavi project?" asks Korde. A few months ago Maharashtra became the first Indian state to allow 100 per cent foreign direct investment in housing projects; sources say this was done to pave the way for global bidding for the Dharavi project ('100 per cent fdi in housing', Down To Earth, November 15, 2005).


The residents, under the banner of Dharavi Bachao Samiti (dbs), allege that sra has only made cosmetic changes to the original redevelopment project, paying scant regard to the basic issues. For instance, the proposed scheme promises residents a free tenement of about 21 sq metre. This agrees with Mumbai's existing floor space index (fsi, a ratio between the built-up area and the size of the plot; the higher the fsi, the higher the number of floors). But for Dharavi, this has been raised further -- allegedly at the behest of builders. Because builders would be able to sell the extra floors in the open market, after allotting just a flat to the residents.

The dbs, has, meanwhile recommended that sra set up a lifetime fund for maintenance of slum dwellers' buildings by using 50 per cent of the builders' profit share. It has also recommended that the height of inner wall of flats be increased to 4.3 metres and there should be a mezzanine floor to allow for cottage industries like papad -making.

But will such massive construction in the heart of Mumbai strain its dilapidated infrastructure? Can Mumbai afford such a construction mania? These questions remain unanswered.