Committee appointed on court's directions dismisses concerns over health impacts of EMF radiations, but calls for more studies on it 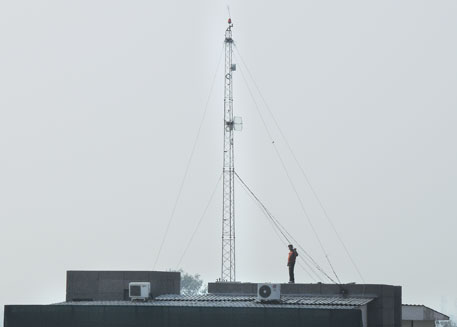 A government report submitted to Allahabad High Court has said there is no need to make norms for electromagnetic field (EMF) radiation from cellphone towers more stringent. The report submitted by the Department of Telecommunications (DoT), on behalf of the Central government, negates the concerns raised in a petition over the hazardous effects of EMF radiations on human health. The government report supports the regulations implemented by DoT in 2012.

The Lucknow bench of the high court is currently hearing a petition filed by Ram Singh Jauhari, a resident of Lucknow, against the Union of India. It was filed in 2010 and sought the removal of a mobile tower next to Jauhari's house. The court had directed the government of India in 2012 to constitute a committee to look into the matter and submit a report so that necessary precautions are taken at the time of granting permission for installation of mobile towers and also to regulate sale of mobile phones.

The committee was set up last year on August 20. Its report was submitted to the court as a counter affadavit in February this year. The next hearing is scheduled later in March. Among other things, the report says the petition is based on data prepared by Girish Kumar, a faculty of IIT-Mumbai. Kumar has been actively campaigning for more atringent norms for mobile phone towers.

The committee comprised officials from DoT and scientists from reputed Indian research institutes, including Kumar. It reviewed information presented by Kumar and assessed the existing EMF regulatory framework and its implementation. The report critically analysed Kumar’s data before finalising the report on the current set of standards for EMF radiations and initiatives taken by the DoT to address public health concerns.

The report says the human body has the capacity to counter thermal effects through its thermo-regulatory mechanism and that the duration of EMF exposure is not significant as long as the prescribed limits for specific absorption rate (SAR) from mobile phones are met. The report, however, calls for more funding to further understand the biological effects of EMF radiations. It also recommends that DoT should undertake more initiatives to educate the public on mobile phone use and EMF radiations.

Was the committee selective?

When contacted, Kumar said that the committee misinterpreted available scientific evidence and selectively chose specific reports and information to support its views. He was of the opinion that the committee observations were primarily based on guidelines of the International Commission on Non-Ionizing Radiation Protection (ICNIRP), while the Bioiniative Report, published in 2007 and 2013 that also takes into account non-thermal effects  was ignored. The ICNIRP while setting standards in 1998 considered only known adverse effects until that time, its 2009 statement further suggests that the plausibility of the proposed non-thermal mechanisms cannot be disproved.

The debate over EMF radiations has been dogged by allegations of conflict of interest made by civil society groups, the telecom industry and scientists. The report mentions Kumar’s conflict of interest in the matter and endorses the statement made by several IIT professors in September 2013 in spite of the fact that some of them have been on the board of certain telecom companies and their studies have been funded by such companies.

While the debate continues about the possible health impacts of EMF radiations, it is the public health that needs to be safe guarded without delay. In this context, it would be important to find out why countries such as Russia and China have more stringent EMF standards than India and how they are able to manage the increasing data traffic at such levels. The report does not satisfactorily address this aspect. Vulnerability of sensitive populations such as children, the pregnant and the elderly to increasing EMF radiations owing to presence of mobile tower clusters in thickly populated urban settings also needs to be assessed and mitigated through appropriate cell tower location policy across the country, says experts.