No need to wait 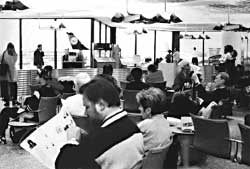 a new airport system being used at Altanta Hartsfield International, is helping passengers miss fewer connections and wait less time for flights. The system has been jointly developed by the us -based National Aeronautics and Space Administration (nasa) and the Federal Aviation Administration (faa). The system known as the Surface Movement Advisor, is a set of computers and software. It electronically connects information constantly gathered by the three principal entities that make an airport run - the local airport authority managing the airport's ramp areas, the airlines managing the gates, and the faa's air traffic controllers.

This automated system allows every group to share information with each other.It has helped the Hartsfield airport run more efficiently by reducing ground operations bottlenecks, thus allowing planes to be serviced and dispatched more quickly. It has reduced airline taxi departure times at the airport by more than one minute per flight. Multiplying this minute by the thousands of daily flights in the whole flow of airport operations leads to a scenario in which passenger will less likely miss their flights and will spend less time waiting.

Brian Glass, nasa's manager for the project, calculates that there are over 1,000 daily departures from Atlanta Hartsfield. It means that nearly 1,000 minutes or us $40,000 to us $50,000 are saved every day in airline direct operating costs. That translates into an annual saving at Hartsfield of us $16 to us $20 million in direct operating costs. According to him, this system may one day lead to making air fares cheap for travellers.

The faa selected Atlanta Hartsfield International Airport in 1995 as the field test site for the system. In June 1996, Delta Air Lines, the nation's largest airline for passenger miles flown, and several other airlines began daily use of the system at Atlanta Hartsfield, which serves as its largest hub.

Bill Drew, Delta's Air Traffic Control Systems Manager, says that with the introduction of this system at Hartsfield, our customer service has improved which is very important for the industry as well as for the faa.