No ozone depletion over India yet

The ozone layer over India is in place, though there is a trend towards depletion, say meteorologists 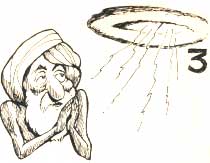 WITH so much worry about the rapid ozone depletion taking place in various parts of the earth, Indian scientists are closely monitoring the ozone layer over India for possible depletion trends. Opinions are many and varied.

According to S K Srivastava, head of the National Ozone Centre in New Delhi, there is no trend to show total ozone depletion over India. V Thaphyal and S M Kulshresta of the Indian Meteorological Department also point out that for the period 1956 to 1986 "ozone measurements exhibit year to year variability, but do not show any increasing or decreasing trend over India."

However, former director of the National Ozone Centre, K Chatterji, now with Development Alternatives, warns that there is no case for complacency. He asserts that his calculations exhibit an ozone depletion trend in the upper, layers of the stratosphere over New Delhi and Pune from 1980 to 1983 in the month of October when the Antarctic ozone hole is at its maximum. Since India already receives high doses of ultraviolet (UV-B) radiation, and is at the threshold go to speak, effects of ozone layer depletion could he far more disastrous in India.

A P Mitra, former director general of the Council of Scientific and Industrial Research, clarifies that while there is no trend in the total ozone value, there is some evidence of ozone depletion at higher altitudes - at about 30 to 40 krn - even over the tropics.

He argues, however, that there is insufficient data and that the depletion may be due to solar cycles and other natural phenomena. However, the effects of CFCs and belong cannot be ruled out.

Ozone levels are the lowest during November and December and the highest in summer. Across the country, variations do exist. In Kodaikanal, the total ozone is 240 to 280 Dobson units (DU), in New Delhi 270 to 320 DU and in Srinagar 290 to 360 DU. One Dobson unit is the equivalent of 0.01 mm of compressed gas at a pressure of 760 rare mercury and 0C.

B N Srivastava of the National Physical Laboratory, who b n working on incident UV- adiation levels, says that duriussummer, at noon, the UV-B radiatlon with a wavelength of 290 nanometre (nm) is equivalent to levels attained in the Antarctica during the ozone hole period. He warns that even a slight depletion of the ozone layer over India may lead to large percentage changes in UV-B radiation over the country.

Increased UV-B radiation will be detrimental to human health and will seriously affect plant and fish production. Light-skinned people from the higher latitudes are more susceptible to skin diseases than dark-skinned people. Inhabitants of low latitudes have, over time, evolved skin pigments that are capable of absorbing these harmful radiations.

According to eminent skin specialists in New Delhi, the incidence of skin cancer in India is low, but they admit that the surveys conducted to identify any trends are inadequate. Controlled studies to observe the effects of changing UV- B radiation concentrations on crops are on, they said. However no field surveys have been done in the country as yet.