Even as UNEP calls for an international treaty on mercury pollution, India and other developing countries are oblivious to the dangers of being at the import-end of the chain 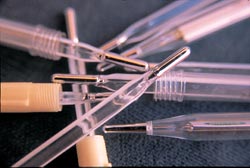 an internationally binding treaty could save millions from dying of mercury pollution exposure. This was the track recently taken by Global Mercury Assessment Working Group of the United Nations Environment Programme (unep). Among other things, the group has urged unep member nations to strengthen cooperation on information sharing, risk assessment and related activities. Increased research, monitoring and data collection on the health and environmental hazards posed by mercury are the other suggestions. "These recommendations are the first step to reduce, and one day eliminate, the environmental and health risks of mercury," said unep executive director Klaus Toepfer. Based on the group's advice, unep's governing council may in future take decisions that will set the course for future action.

It is well established today that exposure to mercury causes permanent damage to the human brain, nervous system and kidneys. Industrial activities have boosted atmospheric concentration of mercury to some three times above pre-industrial levels. The chlor-alkali industry, which manufactures caustic soda using the mercury cell process, is one of the largest sources of mercury waste and emissions. Humans are exposed to these mainly through diet, primarily fish. High levels of mercury in fish have been detected in many regions of the world, including the Artic. This is so because mercury is a trans-boundary pollutant -- countries with minimal mercury emissions could have very high concentrations of the metal in their environs.

As a result of increasing awareness, some developed countries have already initiated action to deal with the mercury menace. For example, the us -- world's largest consumer of mercury -- has recently passed a regulation aiming to limit the use of mercury thermometers. However, environmentalists in developing countries fear that because of such a regulation, mercury stockpiles of developed countries would be dumped more often in developing countries. "This would result in more mercury leaching into the environment, as unlimited quantities of recycled mercury would be available to industries that use outdated technology. India should have adequate laws to prevent this," says Ravi Agarwal of Toxics Link, a New Delhi based non-governmental organisation (ngo).

Tonnes of mercury has already been dumped in India, resulting in a drastic price reduction -- from Rs 320,000 per tonne to Rs 280,000 per tonne in just a span of five years. The reduction has obviously aided polluting industries. However, officials are not bothered. "Flouting laws is easy in a big country like India. Moreover, authorities neither have the experience nor the expertise to deal with the dumping," admits Hosa Bittu, director of hazardous substance management division of the Union ministry of environment and forests.
An alarming statement, in view of the fact that India's mercury consumption has not declined over the years, despite global production falling drastically from 6,900 metric tonnes per annum in 1981 to 1,800 metric tonnes per annum in 2000. Between 1998-2001, India's annual mercury import was 170-190 tonnes -- 10 per cent of the total global consumption. Further, India's mercury pollution load has increased despite a perceptible shift in the chlor-alkali industry to the cleaner cell membrane technology. The Indian chlor-alkali sector produces 12 times less caustic soda than its European counterpart, but it releases nine times more mercury into the environment. The total mercury pollution load in India is said to be about 125 tonnes of elemental mercury. This is about five times more than the total amount of mercury that lead to the Minamata disaster -- the first indicator of health hazards posed by mercury exposure (see 'Caustic-Chlorine Sector: Under Pressure', Down To Earth, Vol 11, No 8, September 15, 2002).

Why is the situation so grim despite the industry adopting better technology? Experts attribute the problem to official apathy. "Officials always go for the easy way out: advocate better technology, rather than insist on reduction of emissions," says R C Shrivastava, senior deputy-director of Industrial Toxicology Research Centre, Lucknow. Pollution control board (pcb) officials feel that their job is done if a company assures that it will change to ecofriendly technology. During a study, the Green Rating Project (grp) of the New Delhi-based ngo Centre for Science and Environment found instances in which pcb officials had stopped monitoring mercury pollution after receiving such an assurance.

I Haq, senior scientist with the New Delhi-based Central Pollution Control Board (cpcb), asserts that this lax attitude is acceptable. "Things happen unnoticed. There is a dearth of manpower. As they are so many industries, state pcbs cannot really be blamed." Excuses such as these explain why companies like Hindustan Lever Limited (hll) were able to dump 5.3 tonnes of highly toxic mercury waste in Kodaikanal town for over 18 years.

hll and other consumer and medical goods producers account for 60 per cent of India's mercury consumption. These industries are bigger polluters than the much-maligned chlor-alkali sector. Experts say that mercury consumption of these industries can be completely phased-out, as alternatives are available (see table: This is the right choice). "The government is not promoting ecofriendly alternatives, which are not much costly," says Chandra Bhushan, coordinator of grp. Ironically, when Haq was questioned about this, he was caught unawares. "What is the alternative to mercury thermometers?" he asked.

Promoting alternatives is important considering the fact that mercury persists in the environment for a long time. Dehra Dun-based People's Science Institute, for instance, has found high levels of mercury in groundwater sources near the Union Carbide Corporation factory in Bhopal. According to the Bhopal Gas Peedit Mahila Udyog Sangathan, the levels are several times higher than the one microgramme per litre limit set by the World Health Organisation. In the wake of such findings, experts are urging the government to 'decontaminate' polluted sites. "Government should closely monitor the industrial sites. Also, it is a must to carry out consistent research for detecting mercury contamination in various place," says K C Sahu, a professor retired from the Indian Institute of Technology, Mumbai. However, this could also be another long wait. "Decontamination is a long procedure. Before, anything else, we need to start identification of contaminated areas," says Haq.

Perhaps the most viable solution at the moment is to educate people. "Even doctors involved with dental mercury amalgam fillings are not aware of the health hazards posed by mercury," says Shrivastava. There is also a need to enact stringent laws and revise the old ones like the outdated 1954 Food Adulteration Act that still governs the permissible levels of metals present in food items. Mercury pollution would assume lethal proportions if efforts are not soon made to phase-out its use. A treaty would help countries like India to find a way out of this quandary.