Nanofluids can make heat less of a bother 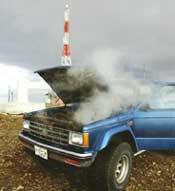 driving on a hot, summer day, makes one wish the air conditioner was more efficient. And the sight of a vehicle stranded because of an overheated radiator immediately makes you check the temperature gauge of your car.

If heat can be oppressive, science can be liberating. Researchers from the University of Leeds in the uk found that mixing trivial quantities of carbon nanotubes (tubes so fine that a bundle of 10,000 will only be as thick as a human hair) can substantially enhance the performance of liquids used as coolants.

Yulong Ding and Richard Williams have shown that nanofluid-containing coolants can achieve up to four times more heat transfer than normal coolants. Apart from being used in automobile engines, airconditioners and industrial units, such nanofluids could open the door to the next generation of computers, by overcoming a major limitation for developing smaller microchips: rapid heat dissipation.

The scientists are also looking at the possibility of using nanofluids during critical surgery to cool the brain to lower its oxygen requirement, thereby reducing the risk of brain damage.

The idea of doping liquids with nanoparticles was first mooted by Steve Choi and Jeff Eastman at the us Department of Energy's Argonne Laboratory in 2001. The scientists announced the possibility of increasing a conventional fluid's ability to transfer heat by 40 per cent by simply adding spherical copper particles of nano-scale. Over the years, their research showed that such heat exchange could be enhanced by 150 per cent, without incurring much additional expense. However, the latest work of the Leeds researchers has attained the highest increase in heat transfer so far. Their paper is scheduled to appear in a forthcoming issue of the International Journal of Heat and Mass Transfer.