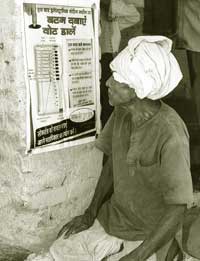 in a verdict aimed at political cleansing, the Supreme Court (sc) issued a notice to attorney general Milon K Banerjee on January 24, 2005, to empower voters with the right to reject all candidates while casting votes in elections. The order was passed in response to a public interest litigation filed by the People's Union for Civil Liberties (pucl), a non-governmental organisation. Its significance increases in view of the forthcoming assembly elections in three states.

Expressing concern over criminalisation of politics, the pucl petition said negative votes will help determine how many people have rejected the winner from any constituency. But many experts believe the change will be a mere ethical gesture unless the current system of choosing the winner by relative majority changes. Under the current system, even if a majority of voters cast negative votes, whoever gets the maximum votes among the candidates will be declared elected.

The Election Commission (ec), which had floated the debate for the "none of the above" option in ballot papers/Electronic Voting Machines (evms) before the 2004 general elections, has voiced full support for the sc verdict. It believes the right will help promote democracy. The sc also directed the ec and the pucl to place on record supporting material to show that the system of negative/neutral voting was prevalent in any other democracy. Voters in Norway and usa's Massachusetts state have such rights. In Finland, they can even express their opinion about candidates in the ballot papers. Sweden gives them the right to write about any candidate of their choice, even somebody not named in the ballot paper.

Earlier, the ec had suggested amendments to the Representation of People's Act, 1951 , (rules 22 and 49 b) to incorporate the provision. It wrote twice to the Union government in this regard but did not receive a response. Political parties also don't seem keen on the proposal. Bharatiya Janata Party spokesperson and former law minister Arun Jaitley recently told the media that the issue is debatable. The party stresses on the need for political consensus on the matter because its implementation falls under the domain of the executive. Senior Congress leader Salman Khurshid also suggests a national debate for bringing about the change.