No wails for whales 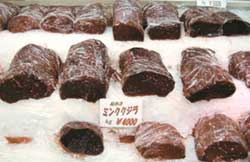 Japan has refused to bow to international pressure to stop whaling. They use the meat for reasearch, they say. But whale meat is also a delicacy in traditional Japanese cuisine. The country had accepted the International Whaling Commission's (iwc) 1986 ban on commercial whaling but resumed whaling for "research" in 1987. Whale meat so obtained was sold in markets. Now, Japan plans to tell iwc that it wants to double its annual catch of minke whales in the Antarctic Ocean.

Australia recently launched an international campaign against Japan's whaling activities in the name of scientific research. Australian prime minister John Howard even wrote a letter to his Japanese counterpart in this regard. But soon after a Japanese fisheries official declared his country's stand before the media, Howard told the Australian parliament that he has been legally advised not to take the matter to the International Court. Japan says minke whales consume valuable fish stock.