No water, no vote 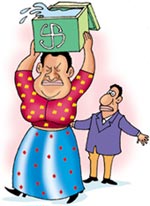 The residents of Teshie, a fishing town in the suburbs of Ghana's capital city of Accra, have announced their plans to boycott the elections scheduled for December 2004 if they do not get adequate water supply.

"It is not that we will vote for this party or against that party; it is just that we will not allow the Electoral Commission's ballot boxes into our town, even if they arrive in armoured carriers. If we cannot have water to drink, there is no point in asking us to choose leaders who cannot deliver anyway," a Teshie resident is reported to have told the local media.

About six months back, community representatives had given an ultimatum to politicians, and officials from the Ghana Water Company, to resolve the decades-old water issue within five months. The government delegation had given assurances to the residents of alleviating the problem within two months. Nothing has allegedly happened on that account. Some local people blame a soft drink multinational company for hijacking the main water line for its production activities, and others put the blame on dilapidated supply lines.