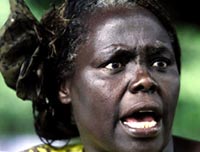 Wangari Maathai, Kenya's popular environmental activist who is also the country's deputy environment minister, has won the Nobel Peace Prize for fighting poverty by trying to save Africa's shrinking forests. She is the first African woman to be honoured thus. This is also the first Nobel prize given to an environmentalist, marking a new interpretation of Swedish philanthropist Alfred Nobel's will, on the basis of which the prize was constituted.

Despite criticism for digressing from the theme of 'peace' by giving the prize to an environmentalist, the Nobel Committee stood by its decision. "Peace on earth depends on our ability to secure our living environment. We have emphasised the environment, democracy building and human rights and especially women's rights. We have added a new dimension to the concept of peace," said Ole Danbolt Mjoes, the committee's head.

Maathai, 64, is a zoology professor who launched the Green Belt Movement in Kenya. She became famous globally when she opposed government-backed deforestation in her country in the late 1980s and 1990s. Her group comprised mostly women, who planted millions of trees across Africa to fight deforestation-induced poverty. They also worked for family planning and nutrition and fought corruption.

Maathai was delighted at the honour bestowed upon her by the West. "It cannot get any better than this -- maybe in heaven," she said. But she evidently did not get carried away. Shortly after the prize was announced, Maathai reiterated her claim that the hiv virus was a biological weapon created by some western power to get rid of people belonging to certain races. "Some say aids came from monkeys, and I doubt that because we have been living with monkeys (since) time immemorial...Us black people are dying more than any other people in this planet... It's true that there are some people who create agents to wipe out other people. If there were no such people, we could have not have invaded Iraq...In fact it (the hiv virus) is created by a scientist for biological warfare," she told the media. The prize will be presented to her in Oslo on December 10, 2004.