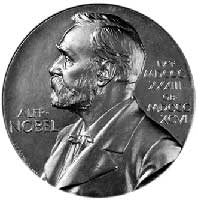 sweden's Karolinska Institute is a place which becomes the centre of attraction for everyone during this time of the year. Its where the Nobel prize winners' list is released from. What made Nobel prizes special this year was that they marked the centenary of the prestigious awards. Surprisingly, the headlines screaming 'war in Afghanistan' did not obliterate the euphoria generated by the prizes.

This year's award for medicine was bestowed upon three biologists who revealed the mysteries of a process central to the growth, development and maintenance of all living organisms: cell division. Leland Hartwell of Seattle's Fred Hutchinson Cancer Research Institute and Paul M Nurse and R Timothy Hunt of London's Imperial Cancer Research Fund, were the three adjudged joint winners. They had worked independently for more than 30 years. Their work had thrown light upon the 'life-cycle' of a cell and the mechanisms that control the processes involved. Their path-breaking work has, over years, led to an entire new discipline in molecular biology, increasing the chance of finding cure for cancers, which spread by excessive or mutant cell division. Pharmaceutical companies worldwide now use their research as groundwork for developing new drugs to control cancer by interrupting cell division.
Few prizes have been as widely predicted as this year's physics award. The winners were Eric A Cornell of the National Institute of Standards and Technology in Boulder, Carl E Wieman of the University of Colorado and Wolfgang Ketterle, a German physicist working at the Massachusetts Institute of Technology. They got the award for creating a state of matter, known as the Bose-Einstein Condensate (bec), which Einstien had only shown to be possible several decades ago.

The research has far-reaching potential in computing, nanotechnology and precision instruments. The matter still lies in the realm of theoretics and laboratories for all practical purposes but scientists predict that it could eventually lead to devices that use streams of wave-like but slow-moving atoms to replace lasers in precision measuring devices ranging from clocks to gyroscopes. "To make matter behave in this controlled way has long been a challenge for researchers," the Royal Swedish Academy wrote in awarding the prize. "This year's Nobel Laureates have succeeded -- they have caused atoms to 'sing in unison'."
This year's chemistry Nobel prize has been awarded to three researchers who developed the technique of catalytic asymmetric synthesis, which allows chemists to steer reactions towards one of two possible symmetrical products. Half the prize went to K Barry Sharpless of the Scripps Research Institute in La Jolla, California, for his work on oxidation reactions. The other half was shared by two researchers for their work on hydrogenation reactions: Ryoji Noyori of Nagoya University, Japan, and William Knowles, a retired chemist. The winners studied reactions that, under normal circumstances, produce an equal mixture of two products with symmetrical structures. Known as chiral products, these molecules are mirror images of each other, but can have very different properties. The side-effects of the morning-sickness drug thalidomide, for example, were caused by a rogue chiral twin of the molecule that the drug's designers had intended to use. Sharpless, Noyori and Knowles have been awarded the prize for developing techniques that tailor reactions so that only one of the two chiral molecules is produced. The techniques, developed by them, are now widely used, particularly to manufacture pure pharmaceuticals.
Consumers who know little will be duped: might seem like stating the obvious but this year's Nobel prize for economics has been awarded for stating this within the ambit of economic theoretics -- an important economic paradigm shift. It has been given to George Akerlof of the University of California, Berkeley, A Michael Spence of Stanford University in California, and Joseph Stiglitz of Columbia University in New York City for providing evidence that even in today's information age, economic markets can be hampered by insufficient knowledge.

These three economists, separately revealed the consequences of what happens when one party in a transaction knows more than the other. Akerlof showed the unhappy consequences of skewed information in 1970: causing either a market to collapse or to be flooded with bad products, an effect called adverse selection. He illustrated this with reference to used-car sales. Here, because the seller knows more than the buyer, the market can become awash with bad vehicles, called 'lemons' in the us. The other economic lemons can be more invidious than shoddy cars, Akerlof pointed out. These effects could cause exploitative interest rates to prevail in local credit markets in developing countries, for example.

The other awards went to Kofi Annan, United Nations secretary general, for peace, and V S Naipul for literature.