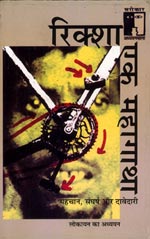 "The book Rickshaw: Ek Mahagatha (The Saga of Rickshaw) presents the findings of the 'Action Research Programme on Rickshaw and Rickshaw-pullers 2000-2002'. The survey covered 24 cities of the National Capital Region.

The book is a rare attempt to touch every aspect of the life of a rickshaw puller -- social, economic as well as humanitarian. It also chronicles the evolution of the rickshaw from its invention in Japan to its present-day avatar. It brings to the fore various problems a rickshaw puller faces and discusses the limiting effects of the licensing policy on the cycle rickshaws of Delhi. According to the book, the decision to distribute only 99,000 licenses among over four lakh pullers will merely foster greater exploitation of the rickshaw pullers by the traffic police It also dismisses the claim that the cycle rickshaws are responsible for traffic congestions.

For those who cry down the cycle rickshaw on humanitarian grounds, the book upholds the utilitarian aspects of the vehicle. It is one of the most important modes of transport in Asia. The book points out: "one lakh cycle-rickshaws in Kolkata take 10 lakh people to their destinations every day. They collectively travel more than what Boeing and Airbuses of both airlines of India collectively travel in a day. Car, scooter, auto, local and metro trains have come, but still the rickshaw is as important as it was before their emergence".

Readers might notice that the figures used in the book are very different from government figures. Ravi explains, "We are not professionals, and we did this kind of survey for the first time; but we are planning to do it again covering a larger area."