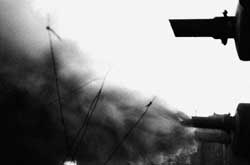 a recent amendment to the environment protection rules has thrown into high relief the old tussle between the large and small-scale diesel generator (dg) set manufacturers. The Environment (Protection) Second Amendment Rules, 2002, brought by the Union ministry of environment and forests (moef), is in force since January 1, 2005.

The amendment specifies two things: one, the maximum noise limit for dg sets with a capacity up to 1,000 kilo volt ampere (kva) should not exceed 75 decibel at one metre from the enclosure surface; two, dg sets should be provided with an integral acoustic enclosure (in-built silencer) at the manufacturing stage itself. While the first condition is well accepted by the industry, All India Genset Manufacturers' Association (aigma ) sternly opposes the latter.

"Prior to the amendment, even the small-scale manufacturers could sell dg sets by assembling diesel engines, alternators and canopies at their facilities. "But now, the rules mandate that only certified companies can manufacture dg sets, hence creating monopoly," says Ashok Khoshoo, general secretary, aigma . Rajiv Garg of R K Acoustics, New Delhi, a dealer in dg sets, alleges that the product cost has gone up manifold. He claims that regulation should happen at the user's end.

Meanwhile, aigma claims it has convinced m o ef to scrap the 2002 rules and the ministry is drafting a fresh notification.

Large companies manufacturing dg sets are however appalled with the development. "User end norms, in effect before the 2002 amendment, never work because monitoring becomes impossible. Regulation must happen at manufacturers' end. Today more than 100 companies have got certificate for type approval and another 70 have received conformance of production certificate. Hence, companies holding 90 per cent of the market share are complying with the 2002 rules.

Should the rules now be diluted to favour a mere 10 per cent of the small scale industry? Can the state pollution control boards test each and every dg set at user end?" questions Kamal Makhija, assistant vice president of Gurgaon-based Sudhir Gensets Ltd.