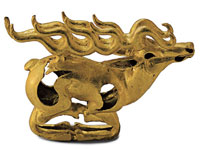 Intricate gold jewellery and adornments, massive cauldrons designed to feed scores of people and giant burial mounds where the ancient elite and their horses lie show just how sophisticated Kazakhstan’s nomadic groups were. An exhibition at New York University’s Institute for the Study of the Ancient World, titled Nomads and Networks, features 250 such Kazakh cultural objects from the first millennium B C. Karen Rubinson, one of the curators, says the artefacts debunk the notion that nomadic societies were less advanced than their sedentary neighbours.

Many of the items come from Pazyryk culture, which consisted of tribes that moved from the lowlands in the winters to the highlands for the warm summer months. Rubinson points out how each object reveals their sophistication. The bronze casting required a deep understanding of metalworking. The size of the cauldrons shows they celebrated community feasts. The exhibition is on display till June 3.