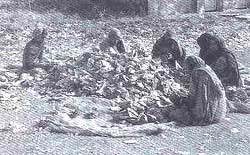 YOU DON'T have to be a smoker or tobacco chewer to be at risk of cancer from tobacco. Just handling large amounts of raw or processed tobacco can lead to changes in human cells, which give rise to uncontrolled cancerous growths.

Rajani Bhisey and her team at Bombay's Cancer Research Institute studied the effect on beedi-rollers in Bombay and other parts of Maharashtra of exposure to carcinogens -- cancer-causing substances -- in the tobacco they handle. Says Bhisey, "Our studies, undertaken over a 4-5 year span, show workers are exposed to dangerously high levels of carcinogens that are either absorbed through the skin or inhaled as dust."

The scientists discovered large amounts of nicotine, a tobacco-specific compound, found its way into the bloodstream of beedi-rollers. The average level of cotenine -- a compound formed when nicotine is broken down in the liver -- found in the urine and saliva of beedi-rollers who did not consume tobacco, was eight times that found in passive smokers.

Workers handling wet tobacco leaves were found to have higher levels of cotenine than those handling dry leaves. An analysis of urine samples for substances that can alter human genes revealed that tobacco-rollers had higher levels of such compounds than control subjects.

Beedis are made by rolling processed beedi tobacco (Nicotiana tabacum) in a dried temburni leaf (Diospyros melanoxylon) and securing it with a thread. On an average, a beedi-roller makes 500 to 1,000 beedis a day and is consequently exposed to as much as 450 grams of tobacco daily.