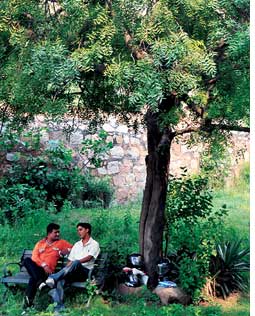 a protein found in neem leaf boosts immune response and helps kill colon cancer cells, said researchers of Chittaranjan National Cancer Institute, Kolkata, and Burdwan University, West Bengal. In the presence of a cancer specific antigen (a type of protein found in human colon cells), the protein in neem works better to rev up production of specific immune cells and subsequent generation of antibodies. They say that the combination of neem leaf protein and the antigen is effective than the antigen alone. According to them, the findings of the research may pave the way for a future cancer vaccine.

Neem leaf is no stranger to the realm of disease research. The roots of the present study lie in a previous research by the same researchers. "In the earlier research, we identified that the medicinal value of a neem leaf springs from a glycoprotein, a type of protein," says lead researcher Rathindranath Baral. For the present study, the researchers prepared neem leaf extract containing glycoprotein and culled carnioembryonic antigen (cea), a type of glycoprotein in human colon cancer cells. They isolated mice macrophages, a type of white blood cells that eat up microorganisms and remove dead cells. Then they made four combinations--macrophages, neem leaf glycoprotein (nlgp)-macrophages, cea- macrophages and cea-macrophages-nlgp. In addition to cultured studies, four groups of mice were injected with one of the four combinations. Human colon tumours were also grown in mice.

"nlgp activates macrophages and its cea -absorbing capacity," says Koustav Sarkar, a co-researcher and lead author of the study published in the August 12 issue of Vaccine.

Lauding the study, Santu Bandyo-padhyay of the Indian Institute of Chemical Biology, Kolkata, says, "The study is encouraging as currently there is no such non-toxic natural product to aid in therapies for human related diseases including cancers. Normally, aluminium hydroxide is used as an aid. In addition to its supportive role in cancer therapy, nlgp may be used to enhance the efficacy of hepatitis B vaccine."