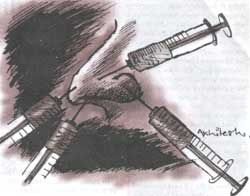 BETWEEN our eyes, something always smells. Right, it is the nose. And till now, the nose has always taken the rear seat when it came to radical medical breakthroughs. But now, those with a nose for innovation have found a novel use for... well, the nose, US researchers say very soon, Alzheimer's disease and other neurodegenerative disorders could be treated with nose drops.

Alzheimer's disease is a neurological disorder that induces rapid memory losses in its victims, a condition that reduces them to vegetables finally. Known victims of this feared disease include Ronald Reagan, the former us president, who was diagnosed as an Alzheimer's patient.

Researchers at Minnesota now plan to use the nasal passage because, they say, it shows great potential as a conduit for delivering drugs directly into the human brain, since the olfactory system provides an easy link between the brain and the outside world.

Getting drugs into the brain is one of neuroscience's biggest challenges. The molecules of many drugs are too large to cross the blood-vein barrier, the tightly-woven cells in the blood vessels in and around the brain that form a kind of protective fence guarding brain tissue. Nerve growth factor (NGF), a promising treatment for Alzheimer's disease, is one such drug. But simply injecting NGF does not work, while other procedures such as grafting NGF-producing cells directly into the brain are both expensive and risky.

But William Frey, a neuroscientist at the Alzheimer's Research Center at Regions Hospital in Minnesota, USA, woke up one morning with the idea of using nose drops to carry the NGF to the brains of his patients. "I knew that bad things could get in this way," he says. "It occurred to me that may be good things could use this way too."

Olfactory nerves are unusual in that they run straight from the olfactory bulb in the brain to the nasal cavity, where they come into contact with "odorants" in the air.

Occasionally, however, Frey points out, the odd anatomy of the olfactory system can be dangerous since it provides a way for some viruses, such as herpes, to sneak into the brain. In one study, even tiny gold particles sprayed into the noses of monkeys were traced along the olfactory nerves and finally into the animals' brains.

So Frey and his colleagues decided to see if NGF could be delivered in nose drops. After anaesthetising 12 rats, the researchers gave half the animals drops in their noses over 30 minutes and injected the other half with NGF They found that under less than an hour, a significant amount of the drug had made its way not only into the olfactory bulb, but also into the hippocampus, amygdala and other regions not directly involved in smelling.

In contrast, very little of the NGF injected into the other rats reached their brain. The same results held true when the researchers administered insulin growth factor one, a possible treatment for stroke, in nose drops.

Frey's team will report on its findings at a meeting of the American Association of Pharmaceutical Scientists in San Francisco, USA, towards the end of this year.

The nose, they say, could deliver drugs not only for Alzheimer's disease but a host of other neurodegenerative disorders as well, including Parkinson's disease and multiple sclerosis.

The team has a patent on the idea and is working with a biotechnology company to develop and market it commercially.