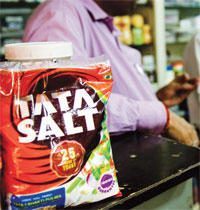 IODINE IS important for the body. It helps convert food into energy and is needed for normal thyroid function. But there have been concerns that the element is lost during cooking. Two studies have now shown that Indian recipes retain most of the iodine in food.

For the first study, T Longvah, deputy director of the National Institute of Nutrition in Hyderabad, and his team measured iodine retention in recipes made with iodised salt and for the second study they studied recipes having non-iodised salt. The researchers found that the percentage of iodine retention was high and almost similar for both types of salts.

The first study was published in Food Chemistry in February this year and the second is to be published in the same journal in January 2013. For the study households from 26 districts across several states were randomly selected. Samples of recipes like aloo fry, aloo parantha, rajmah and khichdi cooked in non-iodised salt were collected from two households of each district. The researchers found that retention of iodine in 38 recipes cooked with non-iodised salt was 65.9 per cent on an average. This was almost similar to iodine retention in food cooked with iodised salt. Longvah, however, warns that while iodine retention might be comparable in both types of salts, the amount of iodine in food made with non-iodised salt is much lower. He presses on the need for a universal salt iodisation programme to provide iodine to the population deficient in it.

Chandrakant Pandav, head of the department of community medicine, at the All India Institute of Medical Sciences (AIIMS), agrees but maintains it is important to have such studies replicated by other institutions also.

However, Ritu Priya, a professor in community medicine at Jawahar Lal Nehru University in Delhi, says the study bolsters the case that universal salt iodisation programme is flawed. “We’ve been asserting that iodised salt could produce toxic levels in people who already have sufficient iodine. Proponents of this programme have been countering this by saying iodine gets lost during cooking, so there’s no way toxic levels can be reached. This study proves iodine is not lost to a great extent,” she says.

Kapil Yadav, assistant professor at the Center for Community Medicine in AIIMS, and a colleague of Pandav, dismisses the argument. “Iodine level in iodised salt is so adjusted that a person gets 150 microgram per day which is safe and way short of the safe upper limit of 1,000 microgram per day, as prescribed by WHO,” he says.

But Priya suggests it would be better if government provides iodised salt only to districts where soil is deficient in iodine. “Coastal states like West Bengal have high iodine amounts in soil. They don’t need iodised salt,” she adds.