Not out of woods 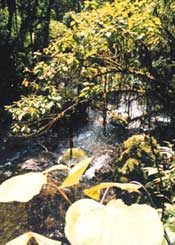 vast areas of primary forests thought to be free from human intervention are in reality being degraded, indicate a series of reports from the World Resources Institute's (wri) Global Forest Watch. The reports are based on a two-year survey that covered Chile, Venezuela, Indonesia, Russia, Central Africa and North America.

"As we examined what we thought were still vast, untouched stretches of intact forests in the world, we came to the conclusion that they are fast becoming a myth," said Jonathan Lash, wri president. "Much of the so called green canopy is in reality crisscrossed by roads, mining and logging concessions." For example, the Russian taiga, long thought of as an expanse of forest protected from human encroachment, now consists of fragments of wilderness (www.globalforestwatch.org, April 2, 2002).

In North America, less than half of the region's forests and woodlands are in tracts of land just 200 square kilometres in size. "Much of the threats facing the remaining intact forests boils down to bad economics, bad management and corruption," said Dirk Bryant, co-director of Global Forest Watch. "We are rapidly moving towards a world where forests are confined primarily to islands of parks and reserves, with surrounding areas managed commercially for timber and other natural resources. The health of the planet's forests will depend on how well we manage and protect these remaining areas."

The reports note that while many countries have taken great strides in enacting laws to protect their forests, in many places regulations are simply not enforced. In Indonesia, for example, about 70 per cent of timber production is illegally logged.

Government policies often favour short-term economic gains instead of long-term stewardship. For instance, in Chile, government policies encourage people to clear native forests that are thousands of years old to make way for plantations of exotic species. As a result, the prehistoric araucaria forests and the second oldest living trees in the world, the alerce , are in danger. In Venezuela, logging and mining practices threaten one of the most pristine forests on the Earth.

Four years ago, Bryant and his colleagues found that only one fifth of the world's historic forests remained as large intact tracts. At the current rate of destruction, they estimate that 40 per cent of what remains of this historical cover would be lost in 10-20 years. "Our most recent studies show that we have underestimated the threats faced by our forests in some of the major countries of the world," said Bryant.