Not so hard to crack 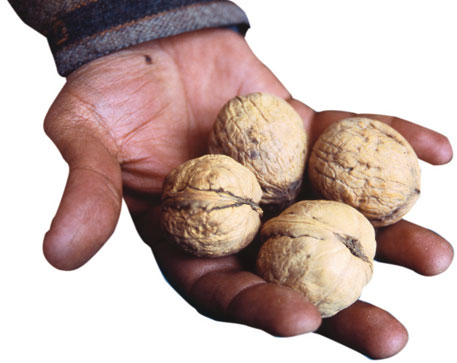 JUST when India thought it would be able to get a big chunk of the global walnut market and began planning towards it, a rare fungus started playing spoilsport. Plant pathologists have isolated the fungus from walnut nurseries in the country for the first time. So far Italy and Argentina have reported sporadic occurrences of the infection in walnut nurseries in 1999 and 2004, respectively. Little research has been done on how to combat the fungus, which kills seedlings within a month of infection. Unless India acts fast, analysts say, it might hit the country’s burgeoning walnut industry. With a 50 per cent rise in production over the previous year, India is all set to be one of the world’s top 10 walnut exporters in the next few years from being the 12th largest exporter.

The infection came to light in September 2008 when scientists at Sher-e-Kashmir University of Agricultural Sciences in Jammu and Kashmir came to know that 60 per cent of the walnut seedlings at the institute’s horticulture station were dying. The scientists tested new walnut varieties at the nursery in Bhaderwah valley. The seedlings had cankers, or dried dead tissue, on the stems. The disease was prominent in two varieties—SKU 0002 and Opex Dachaubaria. “They are said to be disease-free and high-yielding,” says Brajeshwar Singh, plant pathologist at the horticulture station. However, he refused to divulge the origin of the varieties. Investigations showed the canker was caused by soil-borne fungus Fusarium incarnatum. The fungus clogs the food supplying vessels, killing the seedling, says Singh. Though the infection was found in one- to two-year-old seedlings, Singh says it can affect older trees if left unattended. The finding is to be published in Plant Diseases.

Later, while doing rounds of other nurseries in Bhaderwah, they noticed similar infection in wild species too. “The disease has the potential to spread into the wild,” says Singh. This can wreak havoc on the country’s walnut industry as it depends on wild varieties for most of its production, and most wild trees remain unattended, he adds.

Bansilal Puttoo, author of Walnuts in India: Heritage, Cultivation and Utilization and retired emeritus professor of the university, says since the fungus has been found only in nurseries, chances of it spreading into the wild are slim. Anyhow, Singh adds, the disease can be controlled by fungicides. “We would approve the new varieties for cultivation if they yield high during trial and once we figure out an effective way to control the fungus,” he adds.

But experts say it is difficult to control soil-borne fungus like Fusarium as the spores persist in the soil for long. Gina Samarroto, a horticulturist in the US, cautions against introducing susceptible varieties for mass farming as it would help the fungus spread its base.

Sturdy walnuts in the making

Since most of the country’s traditional varieties are susceptible to several pests and fungal diseases, the Indian Council of Agricultural Research (ICAR) is producing disease-resistant varieties. “They are truly organic as their allelopathic properties drive insects away,” says Nazeer Ahmed, director, Central Institute of Temperate Horticulture of ICAR. The council recently distributed the varieties to farmers in Arunachal Pradesh as part of its programme to promote commercial cultivation of the cash crop in all Himalayan states as well as temperate zones like Udhagamandalam, a hill station in Tamil Nadu.
Science & Technology Walnut Plant Diseases Jammu & Kashmir India Horticulture Health Effects Health Effects Health Effects Exports Agriculture Agricultural Research Agricultural Research
SUPPORT US