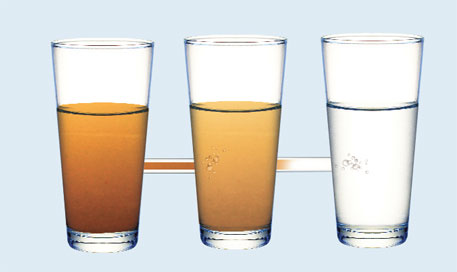 EVERY year, at least 37.7 million people in India suffer from water-borne diseases; close to 1.5 million children die due to diarrhoea; and about 200,000 habitations deal with chemical contamination, according to a paper published by non-profit WaterAid. The problem is further compounded with the rise of drug-resistant diarrhoeal organisms.

The market is flooded with filters that promise pure water by employing UV-based technologies to Reverse Osmosis. But something is wrong here. These systems are just meant for a select few and are a definite misfit in the milieu of urban and rural poor.

It is for this reason that scientists are constantly pushing for water purification solutions that are inexpensive and robust. One such innovation is a hybrid clay synthesised by German and Nigerian scientists. The clay is actually a composite made up of kaolinite clay and papaya seeds. Writing in their paper, published in ACS Sustainable Chemistry and Engineering, the scientists claim that the hybrid is stable, nonbiodegradable, can be easily recovered from aqueous solution by decantation and available in large amounts. It also has a high cation (positively charged metal ions) exchange rate, which means it can absorb and remove cations of metals like, lead, cadmium and nickel from water.

Emmanuel Iyayi Unuabonah, one of the authors from the Department of Chemical Sciences of Redeemer’s University, Nigeria, says, “We have not tried it on arsenic. But I am confident it will be able to remove arsenic from water since it is positively charged like the metal ions used in my research.” Arsenic is one the biggest metallic polluters of groundwater in India. The hybrid clay is also yet to be tested for its ability to remove contaminating microorganisms from water. Commenting on their work, T Pradeep, professor of chemistry at IIT Chennai, says, “Any technology is welcome in the water sector because the problem is huge.” The capacity they reported is good.

What is important is how this material works in an affected area. Water has multitude of contaminants and a good solution should work under all conditions, he adds. Pradeep has been working on developing solutions for water purification for a long time now. He has recently developed a silver-based nanocomposite material that can filter bacterial and viral impurities from water. This composite by itself cannot remove metallic impurities from water, but Pradeep and his team of scientists have teamed it up with other composites that have abilities to filter metallic impurities. The resultant water purifier, which runs without electricity, can provide clean water to a family of five at an annual expense of USÃ”Ã‡Ãª$2.5 assuming a daily consumption of 10 litres. The team has published the findings in PNAS on May 21, 2013.

The IIT-Chennai team has installed the purifier in several communities across the country for two years now as part of a field trial. “We are partnering with several organisations to take these technologies to the market,” he says.

There are several composites under the broad umbrella of materials. Purification solutions can be found for all the contaminants by combining these materials. Thus an all-inclusive solution for clean water can be made, Pradeep adds. Which combinations of composites can be truly effective in field remains to be seen.