Kerala villagers cross swords with Coca Cola over groundwater use 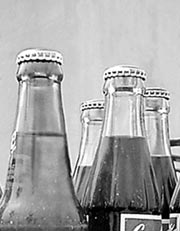 even as Coca-Cola draws a generic link with all things cool in its latest ad, the soft-drink giant is feeling the heat of a two-month-long agitation by local villagers against its bottling plant in Palakkad district of Kerala. Their grievance: excessive groundwater extraction by Hindustan Coca-Cola Beverages Private Limited (hcbl) -- the local unit of the multinational company.

"The plant was set up in 1998 on a 15-hectare (ha) plot in violation of the Kerala Land Utilisation Act of 1967, intended to prevent the use of agricultural land for non-agricultural purposes," alleges Velloor Swaminathan, convenor, Coca-Cola Virudha Janakeeya Samara Samithy, a local pressure group.

hcbl officials, however, refute these allegations. In fact, they are said to have justified the unit's functioning by pointing out that there is no law regulating the use of groundwater. And they are not far wrong.
For the past few weeks Plachimada village, located in Palakkad, has been in the thick of controversy. People from about 1,000 households, including 50 women belonging to Eravala and Malasar tribal communities, have been holding demonstrations and staging sit-ins in front of the hcbl factory complex.

Villagers allege that the soft-drink unit is guzzling water through borewells, sucking the groundwater aquifer and their open wells dry. "Earlier my irrigation pump used to run throughout the day but now there is not enough water to operate it for even 15 minutes," says R Krishnaswamy, who owns about three ha of land adjacent to the hcbl plant. He has not watered his coconut trees for three months. Consequently though there has been a six-fold drop in the yield of nuts, he can only watch helplessly.

To be sure, Coke cannot be solely blamed for the current row. Because the law of the land allows beverage makers to set up shop anywhere in the country. It is not mandatory for them to undertake an environmental impact assessment. A mere consent from the state pollution control board, apart from furnishing details about the quantity of water to be used, is all that they need to get started.
Shocking as it may sound, there are hardly any laws or regulations governing groundwater extraction in India. No mechanisms exist to regulate the amount of water used.

All issues pertaining to groundwater are dealt with by two core bodies -- the Central Ground Water Board (cgwb) and the Central Ground Water Authority (cgwa). Both fall under the Union ministry of water resources. While the cgwb is responsible for advising states on matters relating to groundwater, the cgwa was constituted under the Environmental (Protection) Act, 1986, to regulate and control groundwater management. But both these authorities are by and large advisory.

The cgwa has the mandate for banning the extraction of groundwater in areas where the water table is very low or the water quality has deteriorated because of pollution. "If the water level plummets by four metres over a period of 10 years in a particular place, it is designated as a notified area," reveals a cgwa official. Regions where the natural replenishment of water is less than the annual extraction also come under the purview of notified areas. To date, the cgwa has notified only 11 such spots in the country. The few groundwater norms that have been formulated remain restricted to these areas.
Since there are absolutely no groundwater abstraction controls in the rest of the country, soft-drink makers like Coca-Cola just need to specify how much water will be used in the unit so that they can be charged for that amount. Payment by the user is termed as water cess and is regulated under the Water (Prevention and Control of Pollution) Cess Act, 1977. The industry has to pay cess on the water consumed for specific purposes at prescribed rates. "To determine the amount of water used, meters of prescribed standards are installed at stipulated places," says a Central Pollution Control Board official.

Water cess can differ from state to state and on the basis of type of application. In some cases, this amount can be very low. The hcbl spokesperson informed Down To Earth that the company paid this levy to the Kerala Pollution Control Board every six months. According to him, the cess is paid under three heads:
• For cooling, spraying in mines and boiler at the rate of 2.25 paise per kilolitre (kl)

• For domestic purposes at the rate of 3.00 paise per kl

When compared to what the denizens of Delhi pay for domestic consumption of water, the cess paid by hcbl in Palakkad is a pittance. The capital's residents pay 35 paise per kl for consumption up to 10 kl and Rs 1.50 per kl for use above 20 kl. As against this, a charge of 3.00 paise for 1000 litres of water would indeed make the Kerala district a cost-effective proposition. Significantly, who would want to conserve water when such a paltry sum has to be paid?


Activists and hcbl officials are at loggerheads over the amount of water used at the bottling plant. Coca-Cola representatives contend that the Kerala unit produced 35 lakh cases of soft drinks over a six-month period ending in June this year. They also say that between 0.5 million litres per day (mld) and 0.75 mld of water was consumed at the plant.

However activists dispute the company's claim. "About 85 lorry-loads of beverage products -- each consignment containing 550-600 cases and every case containing 24 bottles of 300 millilitre capacity -- leave the plant daily," alleges Swaminathan. If the quantity of soft drink so arrived at is multiplied by a factor of four (production of one litre of the beverage requires about four litres of water) the amount of water consumed by the unit works out to 1.4 mld.

Another contentious issue is the deterioration in the quality of water in the vicinity of the plant. "One can't cook with this water and when used for bathing it leaves a burning sensation on the face," says a villager living adjacent to the eastern boundary of the factory.

Officials at the Kerala regional office of cgwb have, meanwhile, conducted a survey of the hcbl plant. Their chemical analysis report reveals that the permissible limits for various parameters have been breached in the water samples. It says that high electrical conductivity, which is an index of mineralisation, could be the reason for the deterioration of water quality in the area.

The recycled wastewater used for gardening contains carbon dioxide (co2), which charges the soil water and results in the formation of carbonic acid. Under acidic conditions it dissolves a large variety of soil and rock constituents. This leads to a significant increase in the total dissolved solids content of the water, making it unfit for human consumption as well as for domestic or agricultural uses.

Company officials say that when they use 0.75 mld of water at the plant, 0.5 mld out of this is treated and about 30 per cent of this is reused. But hcbl's contention of recycling water seems hollow considering that the treated water is of poor quality.

Clearly, state governments need to identify users on the basis of water consumed. Stringent regulations should be formulated for all water-intensive industries, both in terms of making them more responsible for managing groundwater resources, and preparing a well-defined locational policy.


Though feeble attempts have been made in the past to frame water laws, they have proved to be non-starters. It was in 1972 that the Union ministry of agriculture prepared a model bill for the first time. It contained detailed criteria on groundwater regulation, and was circulated to all states. Two decades later, the Union ministry of water resources also despatched a similar bill. Since then several states such as Madhya Pradesh, Maharashtra, Karnataka and Tamil Nadu have drafted their own versions of groundwater bills, but are yet to convert them into legislations.

Senior cgwa officials told Down To Earth that the authority has almost finalised groundwater regulation and management rules for the entire country. These have now been submitted to the Union ministry of water resources for further action, they added. "They are holistic rules for regulating the use of groundwater," say the officials.

It will take a gazette notification from the ministry to enforce these rules. But when this will happen is anybody's guess. Till then, such regulations will remain a pipedream. And protests by local communities, such as the one in Palakkad, are only likely to intensify.