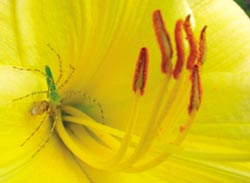 why is the Earth abundant in diversity? The secret lies in the functioning of organisms' genetic makeup. Unfortunately, scholars understand little of it, and this slows down the process of conserving ever-dwindling biodiversity.

Recently, a breakthrough has been made. A research team from the us-based Pennsylvania State University (psu) has discovered a gene that controls pollen functioning during the self-incompatibility process. Flowering plants prevent inbreeding and thereby increase their diversity via the self-incompatibility process. During the process, pollination fails to yield seeds if the pistil (female plant organ) identifies the pollen (dustlike grains containing the male fertilising element) as its own.

The pollen gene was the critical missing link in the understanding of how self-incompatibility works. Ten years ago, researchers from psu had identified the s-rnase gene, which controls pistil functioning. The recently identified gene has been named pislf. Apart from helping conservationists, its discovery could lead to the development of hybrids of crops such as corn and soybean, which have lost their self-incompatibility characteristics (Nature, Vol 429, No 6989, May 20, 2004).
Pollen grains of all plants are haploid. This implies they contain only one set of chromosomes, and each pollen grain comprises only one of the two self-incompatibility alleles (s-alleles) of the parent plant. An allele is one of the number of possible variants of a particular gene. For example, two alleles exist for each of the three genes that determine the eye colour in human beings.

To identify the pollen gene, the team examined the dna sequence of the chromosomal region containing the alleles of the pistil gene. "We did so, as the gene controlling the pollen function was likely to be closely located to the s-rnase gene to prevent recombination. A recombination between these two genes would cause the breakdown of the self-incompatibility process," explains Teh-hui Kao, the lead researcher.

After years of scrutiny the team was able to locate the pislf gene. But the researchers had to demonstrate that pislf was indeed the pollen component of self-incompatibility. "Other labs have found similar genes in the vicinity of the s-rnase, but proximity alone is insufficient to establish the relationship."
To achieve their aim, the researchers relied on the competitive interaction phenomenon: if the pollen has two different alleles of the s-gene (which results 'unnaturally' when the chromosomal region containing the pollen s-allele is duplicated), it fails to function in self-incompatibility and thus self-pollinates. But it the pollen has two identical alleles of the s-gene (resulting 'unnaturally' from duplication of the pollen s-allele) it remains functional in the self-incompatibility process.

The team carried out a series of experiments on plants having two identical alleles -- s1s1 -- of the pislf gene. Using standard plant transformation methods, they introduced a different allele (s2) of pislf in them.

They did so to check their hypothesis -- if pislf was the pollen gene, then the pollen containing pislf s2 allele along with the s1 allele would (on the basis of competitive interaction) fail to function in self-incompatibility and self-pollinate.

They found the results of their experiments were completely in tandem with the hypothesis. The transgenic plants self-pollinated (became self-compatible) and all the resulting progenies inherited the pislf transgene.

The findings could help develop hybrids of many crops. To raise a hybrid, self-pollination and sib-pollination (pollination by a plant of the same hybrid) must be circumvented. One method is hand emasculation of the plant line used as female parent, which is then naturally cross-pollinated by pollen from the line serving as male parent. However, this process is very labour-intensive and expensive.

If the plants can be made self-incompatible by the introduction of the genes controlling the process, then all seeds produced will be hybrids resulting from the cross-pollination of two different plant lines.