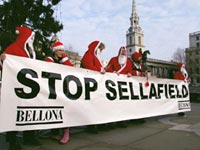 Ireland has initiated legal action against the UK, contending that the controversial Sellafield nuclear plant be shut down since it pollutes the Irish Sea with radioactive waste and is at risk of being targeted by terrorists. The plant is located in northwest England, opposite Ireland's east coast.

Ireland has taken the case to an international court in The Hague, Holland, arguing that the UK has violated several provisions of the UN Convention of the Law of the Sea.

The hearing before a five-member panel at the Permanent Court of Arbitration, an independent organisation that rules in disputes between states or states and individuals, is still continuing. The UK claims that the unit does not generate any significant amount of radioactive waste.

Greenpeace legal expert Duncan Currie calls the case a legal landmark as "a small country is taking on a large one on nuclear matters".