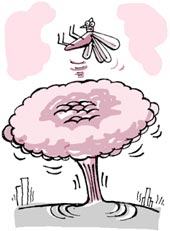 the un, a key opponent of weapons of mass destruction, is ironically all set to harness nuclear energy to combat malaria. Its International Atomic Energy Agency (iaea) intends to soon use the Sterile Insect Technique (sit) in Africa -- the disease hotspot. As per the method, male insects are exposed to radiation to render them sterile, and then they are released into the environs. "When the sterile mosquitoes become dominant in the environs, the mosquito population is bound to dwindle. Decline in their numbers would eventually lead to the eradication of the disease," explains Bart Knols, an entomologist at iaea.

According to Alan Robinson, the head of iaea's entomology unit, the us $4 million project for Africa is still in its infancy. He describes it as a "high-risk project" with many hurdles to be overcome before field trials are conducted. Over the next five years, iaea researchers need to build up resources to produce one million sterile male insects everyday. Furthermore, the mosquitoes must be robust enough to survive when released into the environment and tough enough to compete with fertile males. But they may not result in environmental contamination. "The insects are not radioactive when released in the wild," claim iaea researchers.

Knols and Robinson point out that in the 1970s, El Salvador successfully used sit to eradicate malaria from a small part of the country. "The sterilised insects were released in a small area, about 15 square kilometres. They were able to induce 100 per cent sterility in the mosquito population of the vicinity," informs Knols. Thereafter, the project was scaled up, and around one million male insects were being released per day in a much bigger area. But when civil war broke out in the country, the project was terminated. "We think un can do better than this," asserts Robinson. He, however, believes that the technique of sterilisation cannot be used all over Africa; it should be combined with other insect control techniques.