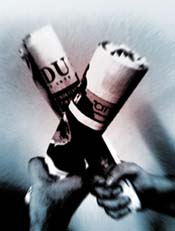 On September 17, West Bengal chief minister Buddhadeb Bhattacharya said at a cii meet that the state can't do without nuclear energy. The media found it a convenient handle to rile his party, the cpi(m), which opposes India's nuclear deal with the us.

But the Hindu did strike a contrast. It reported the chief minister as saying, "We have certain doubts about environmental problems, the cost of [setting up] nuclear plants and the price of electricity generated by them... All these issues will have to be properly assessed and addressed by scientists, planners as well as corporate people."

The Indian Express was, however, more keen to highlight the gap between Bhattacharya's realpolitik and the party line. It reported him saying, "Some environmentalists are vehemently opposed to the idea and they are like fundamentalists."Reportage, we know, is influenced by biases of newspapers and media houses. But the different Bhattacharyas in the two papers were confusing. Were they talking of the same meet?