A blast in a secret weapons factory in the off-limits city of Tomsk-7 shook western Siberia recently and revived memories of Chernobyl. 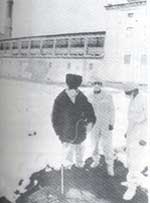 AN EXPLODING tank of radioactive waste at a secret weapons plant in western Siberia is reportedly contaminating much of the surrounding area.

In what is billed as the worst nuclear accident in the region since the Chernobyl disaster, a radioactive cloud billowed northeastward from Tomsk-7. Officials said the exact amount of radiation released from the April 6 blast was not known.

The explosion occurred after nitric acid was added, as a cleanser, to the tank containing uranium, causing a rise in tank pressure, say atomic energy ministry officials. The resulting blast tore off a reinforced concrete slab covering the tank, started a fire and destroyed the building in which the blast occurred.

The international environment group Greenpeace cited Russian nuclear energy minister Viktor Mikhailov as saying the blast occurred in a plutonium separation plant but apparently did not involve plutonium, which is fatal even if inhaled in only microscopic amounts.

Nearly 500 civil defence troops participated in clearing the blast site and some were exposed to radiation, but within acceptable levels. There have been no efforts to evacuate the area and Itar-Tass, the Russian news agency, reports there has been no increase in radiation levels in the Kuzbass coal-mining region, 150 km to the south.

Nuclear experts say there is little cause for alarm and the International Atomic Energy Agency put the accident on Level Three of the international nuclear events scale. Sven Carlsson of the Swedish Radiation Protection Institute noted, "The spill is too limited and too small to measure." And, plant director Gennadi Khandorin says the radiation was confined mostly to the factory's immediate vicinity.

Nevertheless, the Tomsk-7 explosion has set off demands for a thorough review of nuclear production plants in the former Soviet Union and for an end to production of plutonium. This is not the first incident at the plant. In 1990, it was blamed for contaminating the nearby Tom river, resulting in the hospitalisation of 38 persons. Last year, one person was killed and two injured in a nitrogen explosion.