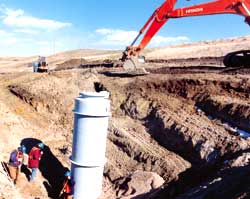 In the biggest ever environmental clean up in theus, Rocky Flats in Colorado, where many of the c old w ar's deadliest weapons were manufactured, is about to become a wildlife sanctuary. It produced plutonium and enriched uranium for nuclear weapons from 1952 until 1989, when the Federal Bureau of Investigation closed it down because of safety and environmental concerns.

The government estimated the clean-up operation would take around 70 years or more, and cost us $40 billion. But surprisingly the clean-up, which began in 1995, took only 10 years and cost us $7 billion, generating the interest of governments world-over. But the before-schedule cleanup was not to the workers' benefit; they missed out on pensions and medical benefits.