A doctor by profession, she created a unique healthcare model for the tribal people of Sonbhadra, adding quality to their lives 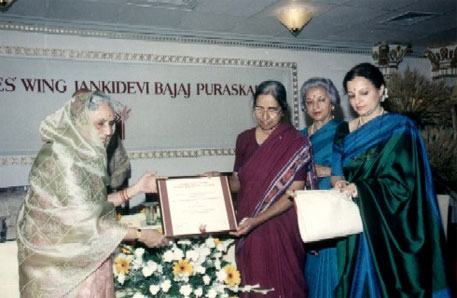 Veteran Gandhian and social worker, Ragini Prem, who dedicated her life to the welfare of tribal people, passed away on November 2. She was 72. She breathed her last at the Ram Manohar Lohia Institute of Medical Sciences in Lucknow, Uttar Pradesh. She was suffering from diabetes and blood pressure and was admitted to hospital after she developed kidney infection.

She is survived by two daughters. Her husband, Prembhai, a Gandhian leader, had passed away in 1994.

Ragini was married to Prembhai on July 10, 1966. Her father, Vishnu Palshikar, also came from a family involved in the Gandhian movement. Ragini was an MD in medicine and taught at Osmania University. After her marriage, she joined her husband in his work for the welfare of tribal and poor people affected by drought and hunger in Sonbhadra district.

Banwasi Seva Ashram was founded in 1954 at the behest of the then chief minister of Uttar Pradesh, Govind Vallabh Pant, to find a permanent solution to famine. Prembhai accepted this challenge and started the task of famine removal in a new manner from 1967. Slowly, social work at the Ashram expanded to other sectors like health.

The Ashram is an outstanding example of a Gandhian voluntary organisation, which has realised Gandhi's vision of a self-sufficient village. The work done by Banwasi Seva Ashram in Sonbhadra shows that antodaya—attention to the poorest of the poor—is the pathway to sarvodaya (welfare of all). The Gram Swaraj movement promoted by Gandhiji and by Vinoba Bhave provided the framework for the programmes of the Ashram.

Ragini quit her job as professor in medicine and decided to work for promotion of traditional tribal knowledge of health. She promoted herbal health practices. She mobilised hundreds of village health volunteers and traditional barefoot health workers and birth attendants in the vicinity of Banwasi Sewa Ashram. Her health project was a boon for Sonbbadra district and a model experiment for the country.

Her contribution for tribal empowerment through Gandhian approach will be a source of inspiration for the young generation, researchers in traditional medicine and tribal health. She added quality to the life of the poor and down-trodden tribal people.

She had also been actively campaigning against mercury pollution in Singrauli area in Sonbhadra, known for its numerous polluting coal power plants.