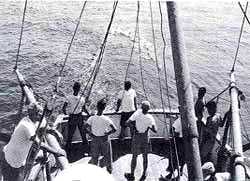 The Union agriculture ministry's plan to draw up a national fisheries policy for the integrated development of fishing in India has drawn flak from organisations representing coastal fisherfolk in Kerala, Tamil Nadu, Goa, West Bengal, Maharashtra and Gujarat.

The fisherfolk have objected strongly to the Union government's policy of supporting the entry of big industrial houses -- both Indian and multinational corporations -- into large-scale fishing in India's oceanic zones. A memorandum submitted to the Prime Minister on October 8, by the National Fishworkers' Forum (NFF) -- the apex body of these organisations -- warned that the fisherfolk would resort to a countrywide agitation, including a "fish bandh", from February next, if the policy were not changed.

The Union government's decision to support the entry of big industrial houses in the fishing sector was prompted by its plans to boost marine food exports. The Prime Minister's office is already considering a proposal, mooted jointly by the Union ministries of commerce and agriculture, which would increase the number of licensed deep sea trawlers operating in Indian waters, from their present figure of 680 to 2,600.

NFF president T Kocherry says, "Such a manifold increase in the number of large mechanised trawlers will have dire consequences for the lakhs of small fisherfolk all over the Indian coast." He contends the larger trawlers regularly transgress into the zones reserved for smaller boats, which has led to repeated clashes between trawler operators and traditional fisherfolk in almost all the coastal states, particularly in Andhra Pradesh, Kerala and Maharashtra (Down To Earth, January 31, 1993). The memorandum to the Prime Minister states that this conflict will only become more intense with the liberalisation of licensing for deep sea trawlers.

The representative groups have also pointed out that many shoals of fish frequently travel out to the deep seas as well. As such, geographical restrictions on operations by large trawlers cannot prevent unsustainable depletion of fish, or ensure its availability to smaller fisherfolk.

However, the objections notwithstanding, the Union government cleared a $20 million, export-oriented fishing project that involves eight trawlers, just two days after the NFF memorandum was submitted.