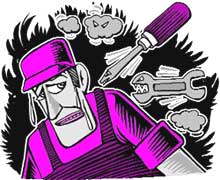 The Employees State Insurance Corporation has estimated that, of seven million workers covered by the Employee State Insurance Scheme (esis) -- an integrated social security scheme, esis provides social protection to workers and their dependents. It supports employees in sickness, maternity and death or disablement in the workspace -- fifty per cent are afflicted with occupational disease. It is a staggering find, for two reasons. First, it grossly underestimates the extent of affliction: esis caters to a miniscule proportion of the Indian workforce (400 million strong, the workforce is) in the organised sector, and no such scheme exists for workers in the informal sector,7 to 8 times bigger. Second, it clearly indicates how disinterested government is in tackling occupational diseases.

Of course, the clearest index of this disinterest is what's happening -- or not -- with the plan to extend insurance schemes to cover the informal sector. Like all plans, it responds to urgent need, for, as T Rajgopal of the Indian Association of Occupational Health (India) points out, "Employees in the unorganised sector are more prone to occupational disease as they work in hazardous conditions without personal protection. Occupational disease in this sector becomes a much more serious issue: a large part of workers in this sector are child labourers". A bill to extend the esis model to this sector was tabled by the erstwhile National Democratic Alliance (nda) government: like all plans government doesn't wish to push through, this bill has lapsed.
esic officials implementing esis in its current form claim the extension is not feasible, for the scheme totally depends on employers. "In esis, employers themselves submit 'contributions', the only way the scheme is run. But whom will we contact in the unorganised sector? We cannot contact 400 million individuals," says Ashok J Pawar, insurance commissioner, esic. esic officials say what nda did was a political stunt, and impractical.

Even if one believes esic 's claim, a question remains: what's the state of knowledge on occupational disease among labourers? Fact-finding or research dominantly focuses on accidents, more visible. Even the insurance commissioner categorises occupational diseases as a 'small' problem compared to bigger ones, like accidental deaths. P L Kaul, director, public relations, says the information esic collects is restricted to how many employees work in which industry. esic does not collect epidemiological data at all.

No wonder the bill's lapsed. No wonder we can ask: occupational disease: what's that?