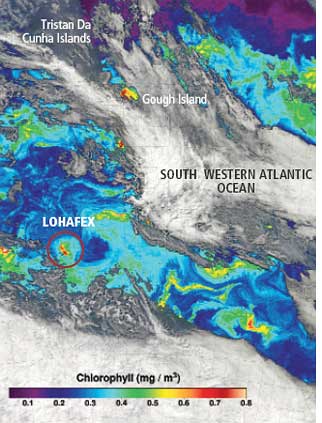 THE Indo-German experiment to induce algal bloom in the South Atlantic Ocean has been ruined by tiny marine organisms called zooplanktons. They ate half the algae grown by spraying a swathe of the ocean surface with iron dust.

The ocean fertilization experiment called Lohafex was carried out by scientists from the Alfred Wegener Institute and the National Institute of Oceanography (nio), Goa, to test the efficacy of algae in absorbing carbon to counter climate change impact. Environmentalists opposed the experiment from the start saying it violated UN moratorium on ocean fertilization (see 'On hold', Down To Earth, February 15, 2009). The experiment concluded in mid-March.

The scientists apparently did not foresee that zooplanktons that live among plants and algae could play spoilsport. "The amount of carbon sequestered was about 50 per cent of the expected amount because the algae were eaten up," said S W A Naqvi, a scientist with nio and project co-researcher. The carbon sequestration experiment was unsuccessful for another reason: the algal growth was limited. It was thought spraying iron dust would be sufficient as all other nutrients algae need to grow, are present in the identified patch of ocean. "We are trying to figure out the other limiting factors," added Naqvi.

The experiment was based on the idea that when algae died and sank to the bottom of the sea, they would take the CO2 down with them. Now that the planktons have eaten them, the carbon in the food chain and not sequestered.