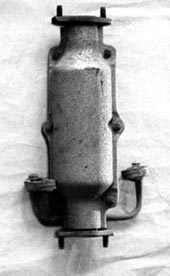 Robert C Stempel, former chairperson and ceo, General Motors, is largely credited for inventing the catalytic converter. In 1974 Corning, a us -based company, made the first catalyst substrates for autocatalyst manufacturers in the us. Catalysts were fitted into 1975 car models, marking the beginning of the gadget's exhaustive use. As Marcus Nurdin, managing director of the International Platinum Association (ipa) explains, "Since catalytic converters were first fitted, more than 12 billion tons of harmful gases have been rendered harmless worldwide." ipa is celebrating the covertor's 30 th anniversary. Its interest? The gadget uses platinum-based metals.

More than 96 per cent of all cars manufactured today are equipped with convertors, an index of its importance. According to Johnson Matthey, a uk-based pioneer in the convertor business, a typical car in 1960 emitted over 100 grams of pollutants for every mile driven. Today, however, a new car bought in the us, Japan or Europe -- where autocatalysts are compulsory -- emits only about two grams of pollutants per mile.

It was in 1952 that Arie Haagen-Smit of the us-based California Institute of Technology discovered the nature and causes of photochemical smog. He determined that a major component of smog was ozone, created by the interaction of nitrogen oxides (nox) and hydrocarbons (hcs). This discovery laid the foundation for most pollution control standards that were subsequently mandated; the catalytic convertor, too, focuses on cleaning up these chemicals.
A catalytic converter is nothing but a chemical plant fitted to an automobile. Its basic function is to clean up the exhaust before it emerges from the tailpipe. A stainless steel or ceramic container is installed between a vehicle's engine and muffler. It is built like a honeycomb, with hundreds of channels coated with a combination of platinum, rhodium and/or palladium-based catalyst. The idea is to provide the passing exhaust fumes maximum exposure; as vehicle exhaust passes through, the converter changes hcs, carbon monoxide (co) and nox into water, nitrogen, and carbon dioxide.

Since its introduction, convertor technology has been consistently improved. Way back in 1976, for instance, a us-based science and materials company called Engelhard introduced the three-way automotive catalyst, which could oxidise co and hcs to carbon dioxide and water while also breaking down nox to nitrogen. This was a phenomenal breakthrough; earlier, convertors could tackle only hcs and co; now, the drive to control vehicular pollution could begin in earnest.
The extensive use of catalytic converters also had indirect benefits. For example, soon after its introduction, the United States Environmental Protection Authority (usepa) realised that leaded fuel severely degraded the functioning of catalyst emission control systems. So on July 16, 1975, it announced "that any American or foreign automobile that has a catalytic converter and has been driven outside the United States, Canada and Mexico (where unleaded gasoline is not generally available), will have to be fitted with a new catalytic converter before it can be imported into the United States. " This began a drive towards a complete phase-out of lead in fuels all over the world.

Currently, convertor technologies -- absolutely critical to meet stringent emissions standards -- are so sophisticated that they require near-zero sulphur fuels to work effectively. In other words, the need for sensitive after-treatment of exhaust has created a concomitant demand to clean up fuels.
The catalytic convertor's ubiquitous presence in our lives comes with 2 caveats. The first: in 1998 usepa made a stunning claim that the converter was a significant contributor to global warming. It is suspected that converters sometimes re-arrange the nitrogen-oxygen compounds in the exhaust to form nitrous oxide, a greenhouse gas 300 times more potent than carbon dioxide.

The second: there is no way to check whether the catalytic converter fitted to your car actually works or not!