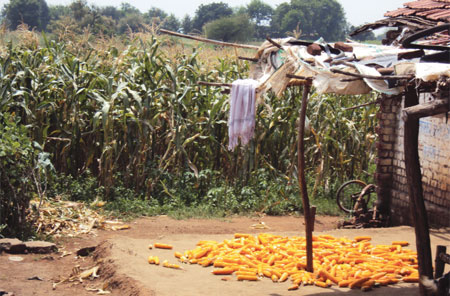 NANDAN Nilekani has just submitted his report on how the Centre should give direct fertiliser subsidy to farmers, but Odisha has already rolled out a scheme to reimburse maize farmers their cost of fertiliser. This will benefit about 45,000 farmers picked for a special maize scheme.

Under the scheme, the farmer has to show his seed purchase cash memo to a block-level technical team convener or the assistant agriculture officer who will also vet his purchases of fertilisers and other inputs, like micronutrients. He will then be given an account payee cheque for Rs 3,500 for every hectare he has cultivated. The amount is to be utilised by the farmer for reimbursing the cost of fertiliser.

Asked if all the farmers would have bank accounts, R S Gopalan, director of the agriculture department, Odisha, says it was likely since all payments under schemes like the National Rural Employment Guarantee were made into bank accounts. He adds that Axis Bank had developed special software for tracking these payments. 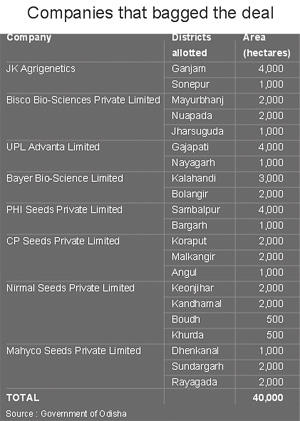 The special maize scheme is a variation of a project the Odisha agriculture department had launched last year to wean farmers away from rice cultivation and hook them to maize. This year’s programme is again a partnership with private seed companies and will cost Rs 15.40 crore. This is a 26.6 per cent jump over last year’s outlay of Rs 12.1 crore to give farmers a generous kit of seeds, fertilisers, biofertilisers and pesticides. While last year’s scheme covered 30,000 hectares (ha), this year it is being expanded to 40,000 ha. The entire cost is being funded by the Centre through its Rashtriya Krishi Vikas Yojna (RKVY). Gopalan says the state has entered into agreements with eight seed companies to supply seeds at a fixed price of Rs 100 per kg (see table). The selected companies have been subsidised by the government to offer seeds at this rate. Last year, the state had bought seeds at a negotiated price from seed companies and supplied them free to farmers. Asked why the change, Gopalan said, “Supplying free seeds is neither a good decision nor a viable proposition.” His contention is farmers made profits from growing maize last year and can now pay for seeds. “So this year we are giving them fertilisers at subsidised rates.”

One of the biggest beneficiaries of the scheme though are NGOs. They stand to pocket Rs 1 crore of the RKVY funds. Under the scheme, a selected NGO gets Rs 250 for every hectare it monitors, ensuring that farmers sow seeds in rows with proper spacing and later apply a basal dose of fertiliser in proper quantity. There is no limit on the hectares that NGOs can monitor.

According to the operational guidelines, the farmer selected for the scheme has to purchase seeds from the designated company/authorised licence dealer at Rs 100 per kg and obtain a valid cash memo. G P Tripathi, deputy director of the Institute on Management of Agriculture Extension in Odisha, says the government wants farmers to gradually become independent and follow the right methods of cultivation.

As the Odisha agriculture department sees it, there are three major advantages of growing maize. First, it is a stable crop that requires less water. Secondly, it can be used both as food and feed. “Today you can see that corn has flooded city markets. It has become an important food item in the urban diet,” says Tripathi. Lastly, it is a crop that has less input cost and gives more profits. “The average input cost is Rs 7,000 to Rs 8,000 per acre (0.4ha), while the farmer earns around Rs 15,000 per acre,” explains Tripathi.

Gopalan says maize’s potential was not explored earlier because farmers generally cultivated maize as a dry crop. Now that its potential is known, they are bound to cultivate it properly to ensure good yields.