Odyssey of a disease

From sheep to cattle and then to human beings, spongiform encephalopathies, a group of fatal brain maladies, have caught the attention of scientists who are now busy finding the missing links 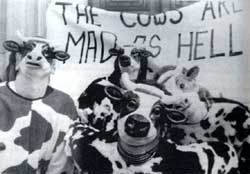 WITH the fallout of the mad cow disease in Britain, attention has been drawn to its human counterpart - Crc utzfeldt- Jakob disease (CM). Reported simultaneously in 1921 by two independent scientists, Hans G Creutzfeldt and Alfons Jakob, the disease affects the brain.

Normally the disease strikes those who are in their '50s and '60s. The renewed interest has re 'sulted from conclusions derived by a British team of experts who have identified a cluster of 10 cases of a variant form of the disease which affects people younger than 42 years of age and some even in their teens. An infection similar to QD exists in cattle. Called bovine spongiform encephalopathy (BSE), the infection was found in 150,000 British animals between 1986 and 1995. The disease apparently entered cattle from feed containing bone meal and offal from sheep afflicted with a closely related infection called scrapie. A satisfactory explanation for the crossing of the species barrier and as to how human beings got the disease is yet to be established.

All the 10 victims had abnormalities called 'PrP plagues' in their brain tissue. The plagues have been seen in scrapie and in a QD-like disease called kuru, found only'in New Guinean tribesfolk who consume human brain in mourning rituals. The plagues had not been seen in CJD, however.

Researchers are trying to establish the role of diet and environment in the development Of QD, after noting its tentative linkage to mad cow disease. According to Robert G Will and his colleagues of the national QD surveillance unit in Edinburgh, Scotland, UK, "That it is due to exposure to the BSE agent is perhaps the most plausible interpretation of our findings. However, we emphasise that we do not have direct evidence of such a link and other explanations are possible."

There have been 62 reported cases of spongiform encephalopathies directly related to growth hormone injections, worldwide. This hormone is derived from the pituitary gland of human cadavers and then injected into the patient undergoing treatment. Sixteen cases have been identified out of 6,200 patients who had taken the injection distributed by the National Institutes of Health in us. The long incubation suggests that the disease may grow with time. Some cases have been the result of reuse of chemically disinfected electrodes which are implanted to study brain wave patterns of patients with such diseases. There have also been cases where a person has got the infection after surgery. But in all cases, some part of the brain or the central nervous system has been involved.

The disease could also be passed on from parents to children. This conclusion is drawn from the fact that there are certain communities in the world more susceptible to it than others. These account for 10 per cent of all cases the world over.

Today, it is believed that rogue prion proteins, which are abnormal variants of prion proteins, are the cause of spongiform diseases. The disease- causing prions are believed to convert the normal prions into their abnormal form. The function of normal prion protein which is produced by a widely occurring gene, is not known, but they lack any hereditary materials like the RNA and DNA. It was this factor which led many scientists to ridicule the prion theory proposed by Stanley B Prusiner of the University of California at San Francisco, us. Regarding it as heretical, scientists could not believe that the disease could be transmitted from one generation to the next without the involvement of genetic material.

However, many scientists are now convinced of this theory as some partial evidence has been furnished thiough experiments. Laboratory animals infected with prions developed spongiform disease, while those in which prions were destroyed and then injected did not.

Agents causing spongiform diseases are not guided by any preset pattern. They do not get any reaction from the body's immune system which is otherwise very prompt in warding off foreign particles. One known difference between agents which cause spongiform disease and those that cause other common infections is that the former are resistant to beat, uv light, radiation and many chemical disinfectants. This gives no guarantee that the extant food processing technologies like cooking, pasteurisation, sterilisation, freezing, drying and pickling are foolproof against a spongiform agent present in foodstuffs.