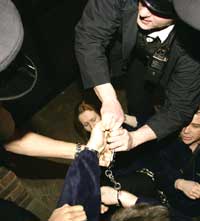 The warmer the globe gets, the more bitter fights it triggers. Passions raged on February 16, 2004, at the International Petroleum Exchange in London, the world's second largest energy market. This was the day the Kyoto Protocol, the global treaty to fight climate change, came into force. To mark the event, activists of international environmental group Greenpeace tried to prevent oil trading at the market. But the traders did not take this kindly. The result: a violent clash.

Greenpeace activists stormed the trading floor in the building's basement with alarms and whistles and tried to stop trading. The traders didn't like being disturbed and attacked them. The building's guards also punched and kicked the activists. "They just went wild. They were trying so hard to hit us, they were falling over each other," alleges Peter Mulhall, a protestor. Stephen Tindale, head of Greenpeace uk, who led the activists, says: "We were non-violent and made it clear that's what we were there for. But there were quite a few blows raining down on our heads. There wasn't much discussion. We decided to retreat for everyone's safety."