Crocodiles today abound in captive breeding centres in India. But the government still applies to them a protection law that was relevant two decades ago when they were an endangered species. 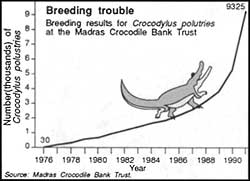 THOUGH efforts to rehabilitate Indian crocodiles have been successful and they are reportedly "multiplying in leaps and bounds", the Union Ministry of Environment and Forests insists they must continue to be accorded the status of an endangered species. MEF officials turn a deaf ear to pleas from wildlife conservationists like Romulus Whitaker that the only legal method left to him to control the teeming population at his Madras Crocodile Bank Trust (MCBT) is to eat "croc-egg omelettes" each morning.

Rehabilitation of the three crocodile species in India -- the mugger (Crocodylus palustris), the gharial (Gavialis gangeticus) and the saltwater crocodile (Crocodylus porosus) -- was started as they were being extirpated due to habitat loss and poaching. However, since the Wildlife Protection Act of 1972 was enacted, the mugger now numbers an estimated 20,000 in captive breeding centres. Whitaker reports that at MCBT alone, the annual production of mugger eggs is about 10,000.

Whitaker contends that, instead, the government should permit crocodile farming by tribals, especially the Irulas. The tribals would benefit from both crocodile skin and meat and would also garner for the country a share of the Rs 530-crore international market in cocodile skins.

Whitaker calculates that if India goes in for crocodile farming, a one-hectare farm with a permanent breeding stock of 50 females and five males would net Rs 30 lakh in its fifth year of operations, producing an annual average of upto 1,200 crocodile skins.

But the MEF remains implacable and the joint director of wildlife, SC Sharma, asserts, "Crocodiles are listed in Schedule I of the Wildlife Protection Act, so they can neither be hunted nor traded, and it will continue to be there."

To this, Whitaker's rejoinder is, "Most wild crocodile habitats are changing so fast that populations can no longer survive without special attention. Especially at risk are the few remaining mangrove habitats of the gharial and the mugger. With the inreasing cost of conservation, it is becoming imperative that some systems of stock management is evolved."

The thrust of Whitaker's argument is that regulations enacted by the Convention for International Trade in Endangered Species (CITES) are enough to prevent poaching. "As all the major hide-importing countries are also signatories to CITES, they can insist on purchasing only those hides that have the approved number tag. Moreover, crocodiles in the wild are in protected forests and national parks, where poaching is difficult."

Even if poaching were to take place, said Whitaker, the entire wild population can be replaced by captive breeding. In 1976, he added, MCBT started with a few adult crocodiles and about 30 hatchlings and last year the population was above 9,000 crocodiles belonging to 10 different species (see table).

MEF officials concede there is poaching now despite the ban and it would be difficult to control it with the present infrastructure. Said Sharma, "If you allow killing, there will be more poaching. With the present enforcement machinery of guards who are just high school pass-outs, there is enough scope."

S C Dey, who has only recently taken over as director of wildlife at MEF, preferred not to comment on the issue pleading he needed time to study it.