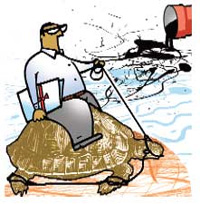 A high court order has not deterred a distillery in Sitamarhi district of Bihar from discharging effluents into the Bagmati. On January 27, the Patna High Court had ordered the Bihar State Pollution Control Board (spcb) and the Central Pollution Control Board (CPCB) to check pollution from Righa Sugar Company distillery and take appropriate action.

A month-and-a-half later, government officials are yet to visit the site in Riga block, affected villagers said.

The court ordered the action on a petition by a Sitamarhi activist, Nand Kishore Singh. “We thought some action would be taken against the sugar mill after the court intervention, but the authorities have not even started inquiry till now,” said Arun Kumar, a resident of Riga.

The effluent treatment plants inside the factory are used as storage space, villagers alleged (see 'Industry pollutants kill cattle and fish in Bihar', Down To Earth, February 15, 2008).

Effluents from distilleries severely deplete dissolved oxygen in water. “They are more harmful than effluents of sugar mills. Such industries are supposed to treat effluents before releasing them in the open,” said D D Basu, a senior scientist with CPCB.

Days before the court order, spcb allowed the distillery to increase its capacity from 3,500 tonnes to 5,000 tonnes a day. spcb officials refused to say what action they propose. “Action is under process,” said an official who did not want to be named.