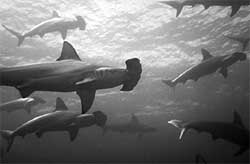 a conservationists versus people tussle has built up in the Galapagos Islands in Ecuador. Over the last few years, fisherfolk have persistently staked claim to the resources of the world's second largest marine reserve which houses sea cucumbers, sharks, lobsters, giant tortoises and sea horses, among other species.

At the heart of the face-off between conservationists and the locals is the latter's right -- or the lack of it -- to the resources in the seas around the islands. The Galapagos comprise 12 large volcanic islands and dozens of smaller ones set in the Pacific Ocean, 800 km west of Ecuador. According to the Charles Darwin Foundation in Galapagos, largescale commercial -- and often illegal -- fishing is the biggest threat to the marine environment of the islands. In 1988 and 1991, clandestine shark fisheries were discovered. It is also estimated that tens of thousands of sharks have been killed for the Asian shark fin soup market, at times using the Galapagos sea lion as a bait.

However, it is the fisherfolk's excessive fishing of sea cucumbers that has proved a major irritant for conservationists. Apart from being delicious, sea cucumbers are profitable too: fisherfolk can make us $2.50 per pound (0.454 kg) which is about 20 times more than they make for other species.

Since 1992, when the Ecuadorian government imposed a ban on sea cucumber fishing, there have been several violent protests from fisherfolk, who even hacked 86 giant tortoises to death in one of these clashes. These protests have started a debate on whether people and wildlife can co-exist amicably on the Galapagos. Conservation groups like the World Wide Fund for Nature feel that in the long run, a compromise between conservationists and the local people has to be made if the priceless heritage of the Galapagos is not to be lost forever.