How can one conserve a wildlife sanctuary better? By flagrantly trespassing on one part of it. Then picking up the tab for planting trees on another in recompense. This is precisely the logic underlying a petition filed by Essar Oil Limited in the Supreme Court 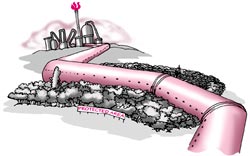 How can one conserve a wildlife sanctuary better? By flagrantly trespassing on one part of it. Then picking up the tab for planting trees on another in recompense. This is precisely the logic underlying a petition filed by Essar Oil Limited in the Supreme Court (sc). The case, scheduled to be heard next on July 7, 2003, may have a bearing on protected areas across the country. For it could set an important precedent with regard to such a line of reasoning, adduced by vested interests pursuing an exploitative agenda.

The site in question is the Marine National Park and Marine Sanctuary that stretches over 140 kilometres of the Gulf of Kutch in Gujarat. Located in the inter-tidal zone along Jamnagar, it has lately come to be viewed more as an ideal transit channel for oil rather than the haven it is meant to be for upwards of 1,000 species of flora and fauna. Some companies -- including Oil India Company and Reliance Petroleum Limited -- have already laid pipelines through the national park to transport oil from Kutch. Now, two others -- Essar and Bharat Oman Refinery Limited (borl) -- are waiting in the wings. The only impediment is the ongoing litigation in the sc against the proposed move.

The final hearing in the case was supposed to take place on May 2, 2003. P Chidambaram, the lawyer for petitioner Essar Oil Limited, seemed eager to wrap up the four-year-long legal battle. To the relief of the non-governmental organisations (ngos) opposed to the projects, the two judges hearing the case decided to deliberate further over the issue and postponed the matter. "But there was a point when it was tilted in favour of the oil companies," observes Ritwick Dutta, a Delhi-based lawyer who has followed the case closely.
In 1990, the Ahmedabad-based Essar Oil Limited envisaged a petroleum refinery at Vadinar in Gujarat. borl too put forward a similar proposal. As a part of its project, Essar sought to draw a pipeline through the national park and sanctuary using about 8.79 hectares (ha) of protected area. But in July 2000, the division bench of the Gujarat High Court (hc) passed an order denying the right of way to the company. In fact, it directed the state forest department to disallow any pending pipeline proposal in the region. The ruling came in response to petitions filed by two local public interest groups, Halar Utkarsh Samiti and Jan Sangharsh Manch. The hc exempted borl from the purview of the judgement on the grounds that the company was born out of an agreement between the governments of India and Oman. Significantly, environment laws are silent on this issue.

In its entirety, the hc case was pivoted on two points: whether the oil companies had secured permission from the Gujarat government and the chief wildlife warden (cww) of the state for the pipeline's route. And if at all the cww was authorised to give such a clearance. The companies were wishing to exploit a couple of sections of the Wildlife Protection Act (wpa), 1972, which grant the forest official the power to allow certain activities inside protected areas, albeit with some stringent safeguards.

Section 29 of the act states: "No person shall destroy, exploit or ...damage the habitat...within (a) sanctuary except under and in accordance with a permit granted by the chief wildlife warden.... (Further) no such permission shall be granted unless the state government, being satisfied that such destruction, exploitation...is necessary for the improvement and better management of the wildlife therein, authorises the issue of such permit." Dutta interprets the clause: "It means that the cww can give the green light for some activities within the sanctuary, but only if the state government deems that they are a must for the management of wildlife. The emphasis here is on the word necessary." The hc construed that the activity had to be indispensable, essential or needful.

The other portion of the act that figured during the case proceedings was section 33. Sub-sections (b) and (c) of this clause vest in the cww the power to "take such steps as will ensure ... the preservation of the sanctuary and wild animals", and "measures ... necessary for the improvement of... (the) habitat".

Sunita Dubey of Environmental Justice Initiative, a Delhi-based ngo, points out: "Essar Oil claimed that it had secured the requisite permission. More appallingly, the company argued that the permission was valid since it was paying compensation for the use of the forestland. The amount, it contended, could be used for afforestation purposes elsewhere in the sanctuary, consequently leading to betterment of wildlife." Dutta brings out the paradox in the company's stand: "In effect, it was trying to prove that building a pipeline was necessary for the improvement of wildlife."


After having lost the case in the hc, Essar filed the special leave petition in the sc on which the apex court's verdict is awaited. However, one aspect of the controversy that has remained shrouded in mystery is the exact nature of clearance the company has obtained for the project.

Essar Oil claims that it has got the requisite sanction. "(We have) obtained all relevant environmental approvals from the Union and state governments...," states B Ganesh Pai, general manager, corporate communications, Essar Group. The company makes out its case by citing the example of Reliance, which had obtained an order from the then cww for allowing a pipeline through the area in 1997. A year later, the hc had held the permit valid.

But ngos' lawyers contend that Essar's case is different. It has got the go-ahead merely for diversion of forestland to non-forest purposes under section 2 of the Forest Conservation Act (fca), 1980, and not for damage to wildlife under the wpa. The activist bodies assert that the Union ministry of environment and forests (moef) can accord permission only under the fca, and the state government alone can empower the cww to invoke the provisions of the wpa. They charge Essar with trying to pass off the moef nod as the approval it should have obtained under the wpa to lend legitimacy to the pipeline project.

On their part, the Union and state governments have further compounded the problem by making diametrically opposite statements. The Gujarat government filed an affidavit in the hc mentioning that it had not cleared the project under the wpa. On the other hand, the attorney general maintained in the sc that the Union government was ready to confirm that permission had actually been granted.

Meanwhile, the chief secretary of Gujarat, P K Laheri, reacted brusquely on being quizzed by Down To Earth: "I don't have to disclose to the public or the media what the (state) government's stand is. The details are before the court." The Gujarat government's secretary for environment and forests, Arjun Sinh, further obfuscated the issue: "We don't have a stand on this. We shall react after the judgement has been delivered." The current cww, M L Khanna -- supposedly the guardian of protected areas -- clammed up on the pretext that the "matter is sub-judice".

Notwithstanding the caginess of the authorities, the long paper trail generated during the legal battle is a clear giveaway. "Letters exchanged between the company, and various officials of the state government and forest department raise serious doubts about the intention of the authorities," alleges Dutta. "Tacit complicity is evident in the way the governments have been acting," admits a senior forest officer, adding: "They have never tried to clarify whether or not permission was granted under the wpa."


As July 7 approaches, environmentalists are keeping their fingers crossed. Not only because the marine national park is getting choked by snaking pipelines, but also because it has a history of spills. A study conducted by Ahmedabad-based ngo Centre for Environment Education has detailed the damage done to the region: "Tar balls and spillages have been observed near the (oil) terminal (at Vadinar). Burning, yellowing and retardation of the mangrove vegetation due to oil spillage have been observed off the coast.... The total quantity of effluents released amounts to over 80,000 cubic metres...."

Predictably, Essar's overriding concern is the Rs 5,300 crore it has sunk into the pipeline project so far. ngos' counsel Nirupam Nanavati is, however, reported to have taken a wide-angle view of the situation. He observed in the sc: "While we do not comment on the court's order to divest the rights of millions of tribals to usufruct from the forest under the wpa, the law must be enforced with equal vigour against all -- including the industry. Such investment and construction should be looked upon as monuments of arrogance."

Ejaz Maqbool, lawyer for Halar Utkarsh Samiti in the case, says: "The hc had held that laying of pipelines is not a permissible activity under section 29 of the wpa and, therefore, clearance could not be granted." A senior forest officer avers: "The case is at a crucial stage. In the worst-case scenario, section 29 may be re-interpreted to open up protected areas to activities that could debilitate the environment."