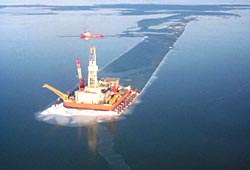 with the recent discovery of an extremely large offshore petroleum reserve in the northern sector of the Caspian Sea, an environmental disaster is in the making. Leading oil companies -- Agip, British Gas, ExxonMobil, Shell and TotalFinaElf -- are poised to start developing a field near the deposit. The extent of the newly discovered petroleum reserve -- 124,319 hectares -- is large enough to even surpass the size of the North Sea oil reserves. But scientists say pumping out the oil from the deposit, known as the Kashagan field, threatens the northern Caspian. Emptying the oil and gas could trigger devastating earthquakes. "The oil beneath Kashagan is a bomb. If disturbed, it will explode," says Muftach Diarov, a geologist who heads Atyrau-based Oil and Gas Institute.

The northern basin of Caspian averages little more than 10 metres in depth. This makes it a formidable challenge for the oil companies. Moreover, the oil in Kashagan is pressurised to 1,000 atmospheres and is at 100-120c. "The problem is that we do not have enough experience to work under such extreme conditions," says Diarov. Opposition to Kashagan's exploitation also stems from the fear that it would push the prized Caspian sturgeon closer to extinction. Furthermore, it may aggravate the problem of air pollution.