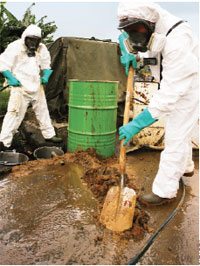 THE High Court of Justice in London ruled that some testimonies against Dutch oil trading company accused of dumping toxic waste in Ivory Coast will be heard in private. The ruling followed allegations that the company, Trafigura, was trying to influence witnesses. The people of Ivory Coast have sued Trafigura for US $160 million in London where the company has its headquarters. The case will be heard from October. In March, the court granted the plaintiffs an injunction against Trafigura, preventing it from contacting witnesses. The law firm representing Trafigura, Macfarlanes, was accused of interviewing a witness to the dumping incident and paying for his trip to Morocco. In August 2006, a ship named Probo Koala, chartered by Trafigura, offloaded 500 tonnes of toxic waste at 14 open-air municipal dumps in Abidjan. Seventeen people living near the dumps died and about 100,000 sought medical help after being exposed to the hazardous waste. Trafigura claimed it had hired a local contractor Campagnie Tommy to dump the waste and hence can’t be held responsible. It also claimed the waste was grey water from the ship’s tanks. The plaintiffs said the waste was hazardous as it had high levels of toxic soda, a sulphur compound and hydrogen sulphide. In October 2008, Tommy’s director was held guilty and sentenced to 20 years in prison. Ã”Ã»Ã¡