That, too, for very long 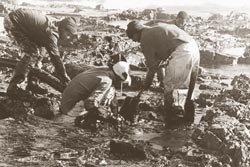 it is a must for environmental regulators to consider the long-term impacts of an oilspill, indicates a recent study. Researchers have found that the devastating effects of the Exxon Valdez oilspill on Alaska's waters and beaches are far worse than what was estimated earlier.

When the Valdez tanker hit a reef in 1989 and started spilling 11 million gallons of crude oil near Alaska's Prince William Sound beaches, scientists admitted that thousands of birds and sea mammals would die quickly. They, however, asserted that the environment would recover as soon as the oil dissipates. "It was a fatal guess. To date the sea creatures continue to suffer, as the oil has lingered on in tiny patches, slowing down reproduction and leading to stunted growth of the marine organisms," says Charles H Peterson, a professor at the us-based University of North Carolina, who led the research.

Peterson along with his colleagues analysed us government's studies about the problems seen in sea otters, harlequin ducks, salmons and many other marine creatures. They found that chronic exposure to the oil boosted mortality among incubating pink salmon eggs for at least four years after the spill. "Surprisingly, higher mortality was induced by concentrations of polycyclic aromatic hydrocarbons (present in the oil) of only a few parts per billion. This finding is enough for the administrators to reconsider the foundations of ecological risk assessment because acute mortality from oil, in official terms, involves concentrations 1,000 times greater," asserts Peterson.

Officials of Exxon Mobil, however, dispute the findings. "The few beach sites that were studied represent only about 10 hectares of the total 5,000 kilometres of Prince William Sound shoreline. Therefore presence of oil in these places cannot affect the marine life," says Frank Sprow, the company's vice president for safety, health and the environment. But these arguments do not seem to hold water, especially as the findings pertain to the worst tanker disaster in the us, which killed at least 250,000 sea birds and thousands of marine mammals. Exxon had to spent over us $2 billion on the clean-up process.