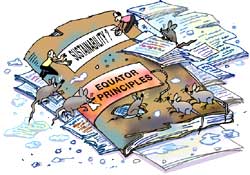 The International Finance Corporation (ifc), the private sector arm of the World Bank, has recently adopted a new set of regulations for companies borrowing from it. The new rules, called the policy and performance standards on environmental and social sustainability, add to the existing framework of the Equator Principles, (see box: Managing risk ) which addresses issues of labour rights, community health, safety and security and disclosure of information. Issues of natural habitat, indigenous peoples, involuntary resettlement, dam safety and cultural sites already find a place in the Equator Principles, an agreement chalked out to adhere to social and environment safeguards of the bank. While the ifc maintains that the new regulation would make business more accountable and minimise the negative impact of projects on environment and affected communities, environmental watchdogs say it is not enough.

According to Lars Thunell, ifc 's executive vice president, The new ifc standards are stronger, better, and more comprehensive than any other international finance institution working with the private sector. Our aim is to increase the development impact of projects in which we invest." However, not everyone agrees. While labour groups term the guidelines as a 'good start', environmental groups have termed it 'inadequate' and even 'vague'.

The Brussels-based International Confederation of Free Trade Unions (icftu) said ifc's new guidelines on labour are on par with those issued by the International Labour Organization (font class='UCASE'>ilo). icftu notes that the borrowing companies would have to abide by the 'core labour standards' rules (forced labour, child labour, wages, discriminatory practices, recognition of freedom of association, right to collective bargaining) as defined by the ilo. "Thousands of workers in ifc -financed projects stand to benefit from this new decision, which we believe should set some kind of a precedent for international lending in both the private and public sectors," said icftu general secretary Guy Ryder.

Although icftu has welcomed the guidelines and offered to work with ifc to implement the new labour standards, it has admitted to a lack of an effective implementation mechanism within the framework. But without effective and efficient monitoring mechanism, the environmental groups are concerned whether private companies would change their behaviour. The Netherlands-based Friends of Earth International feels the new guidelines do not throw light on post-project monitoring and implementation: "Rather than addressing fundamental deficiencies, ifc opted to launch a revised guidelines that would recognise and institutionalise this failure to implement standards." Experts have also been critical of the lack of publicly available information on how banks implement such guidelines, thus making it virtually impossible to track down their compliance with safeguards.

Other groups that criticised the move include the us -based Bank Information Centre, Canada-based Environmental Defence, Indian Law Resource Centre, a us -based legal advocacy group for indigenous people, and International Accountability Project, an international public interest advocacy organisation. These groups are concerned about the enforcement of the guidelines. World Track, a global coalition of ngo s, described the new ifc approach as a 'risky experiment' marked by vague language and noncommittal statements that they fear can affect local people and the environment in much worse a manner than ever before. Moreover, if past experiences are any thing to go by, there is very little hope for things to get better (see box: Low standards).

Pre-project assessment is of extreme significance for developing countries. Besides post-implementation monitoring, the new guidelines do not address the question of a monitoring agency. Currently, for any post-implementation monitoring, ifc expects and relies only on the companies. The guidelines advocate effective community participation in successful management of risks and impacts to affected communities. But when it comes to implementation, it leaves over the responsibility completely to its clients. It also expects its clients to manage any environmental or social risk.

Environmental groups stress the fact that the new ifc guidelines do not provide for outside monitoring and require independent overseeing and verification of project impacts. Experts believe that engaging and promoting knowledge-based ngos in monitoring and assessment could be beneficial. There is a catch though. Although ifc says it would monitor and review the client's social and environmental performance throughout the 'life of investment', it does not define what 'life of investment means'. For some of the activities like mining and extraction, the impact remains for years, even after the project is over.

ifc gives billions of dollars every year to development projects affecting environment and livelihood of millions around the world. So far, ifc has backed projects of 3,319 companies in 140 developing nations. Last year alone, ifc invested more than us $24 billion in developing countries. To protect people and environment against the harmful impacts of projects that it finances, ifc adopted safeguard policies in 1998. Companies qualified for ifc funding only if they followed its policies.

Loopholes however, remained and ifc came up with guidelines as a so-called corrective measure It is important to note that only the revised guidelines are not being questioned. The policy review that happened in three stages was filled with controversies and ngos and advocacy groups had boycotted the process because of lack of transparency and clarity in the review process.

With the changing global perceptions on corporate responsibility and the need for sustainable development, safeguard policies can be helpful. The time is right for private companies to start integrating environmental and social concerns with their business operations in the true sense of the term. However, without an effective system of monitoring during the project and more importantly, after the project, it is unlikely that private companies will follow what ifc says.