Engineers are hot on the heels of a new supersonic commercial aircraft, while the untiring wings of the good old Concorde receive ageing monitors 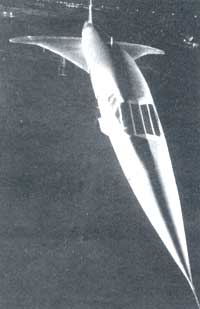 IT WAS in 1969 that the Concorde, the world's first commercial supersonic aircraft, built jointly by France and Britain, made its high-flying debut. Twenty seven years later, it is still the only one of its kind. But its successor is being developed in design bureaux and laboratories around the world. Engineers, overjoyed to find that the Concorde is actually not ageing as fast as had been feared, are working out measures to ensure its continued functioning.

The original ground tests conducted before the Concorde was launched covered 20,000 cycles, during which the temperature of the metal of the Concorde fuselage and wings was raised to the 125*c and then cooled to -10*c. That had led to the conclusion that the Concorde should be licensed for operations not exceeding 6,700 cycles, a milestone which the oldest of the British Airways Concorde will soon reach.

This actually confirms what certain engineers predicted a few years ago: that the effect of heating on the structure of the Concorde during supersonic flights has a beneficial effect. One may ask why. As it climbs, an aircraft passing through clouds picks up 'a great deal of moisture and ice. On a subsonic (designating speeds less than that of sound) machine, these ice deposits will remain for hours on the metal of the wings and fuselage, the temperature of which varies between -20'c and 730*c. On a supersonic aircraft, however, the high speed causes kinetic heating which vapourises the ice. In other words, the Concorde remains dry during its flight and thus avoids corrosion, which slows down the ageing process.

In view of the excellent health of the Concorde, the technicians believe that this unusual aircraft still has a bright future and that it can certainly exceed the maximum of 6,700 cycles originally assigned to it.

Engineers are thus contemplating on rectifying existing Concordes and enhancing their longevity. The major problem is that the machinery needed to put them through the necessary tests do not exist and cannot be rebuilt. It has therefore been decided to fit 35 stress gauges on each of the Concordes in service, to measure the tiniest structural deformity that might have cropped up.

The results obtained will then be extrapolated to determine whether the Concorde can in fact continue its career beyond 8,000 cycles, initially, and then 10,000. If the certifying authorities are convinced, the Concorde could go on flying for several more years and end its career in the middle of the next decade, just at a time when its successor will be ready to take over.

Meanwhile, the successor to the Concorde seems to have engaged the attention of many an aero-tech company. These include the 'Group of 8' consisting of two us companies - Boeing and McDonnell - Typolev from Russia, Italy's Alenia, British Airways, Deutsche Aerospace of Germany, Aerospatiale of France and some Japanese companies. They are all working on developing a new commercial supersonic aircraft.

'The French company Snecma and Rolls Royce are working together on developing an engine for the Concorde's successor. This is a variable cycle engine known as the Mid- Tandem-Fan (MTF), in which the centre is a twin-flow fan in tandem with the first low pressure compressor. This system enables the MTF to operate with twin flows and a high bypass ratio during take off at the subsonic stage, and a reduced bypass ratio in the supersonic cruise. The advantages are low fuel consumption and reduced noise. In parallel with the MTF, Snecma is also evaluating a concept known as the Ejector-Mixer engine which should reduce the noise level by 15 to 20 decibels.

To mark the 25th anniversary of the Concorde's first test flight, three European aircraft manufacturers - British Air-ways, Deutsche Aerospace and Adrospatiale - decided to join forces and launched a design programme for a possible successor to the Concorde. The objective being to develop a commercial supersonic aircraft with an operating range of about 10,000 km, 250 seats, and a speed of Mach-ii (twice the speed of sound).

There has been much resistance to the Concorde from various countries like India, due to its polluting nature and dangerously high sound 'levels. Despite all that, initial studies show a potential market of 500 to 1,000 postConcorde aircrafts. It has been suggested that only one such flying machine be'built to ensure future commercial viability.